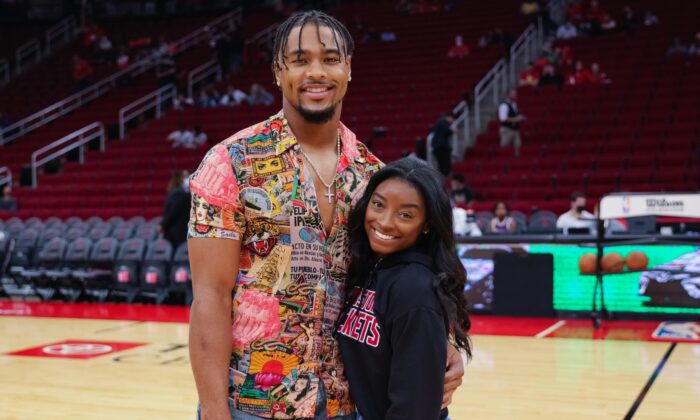 Simone Biles and Jonathan Owens attend a game between the Houston Rockets and the Los Angeles Lakers at Toyota Center in Houston, Texas, on Dec. 28, 2021. (Carmen Mandato/Getty Images)
Sports News

Olympic gold medalist Simone Biles and her boyfriend, Jonathan Owens, a defensive back with the Houston Texans, are getting engaged, the couple revealed via social media on Tuesday.

“THE EASIEST YES,” Biles shared on Instagram. “I can’t wait to spend forever & ever with you, you’re everything I dreamed of and more! let’s get married FIANCÉ.”

Biles shared her engagement along with a series of pictures, showing the 26-year-old NFL player kneeling as he proposed to his 24-year-old girlfriend under a gazebo in Houston. The post also includes a close-up of her oval-cut diamond ring.

“Ready for forever with you,” Owens commented on the post from his wife-to-be.

Owens, who has been playing with the Houston Texans for several years, shared the same pictures as Biles on Instagram, saying the couple got engaged on Valentine’s Day.

“Woke up this morning with a fiancée,” Owens said. “She really had no clue what was coming.”

The couple first met each other in March 2020 on the internet, Owens told Texas Monthly, adding that at first, he didn’t know who she was and had never heard of her.

“When I told her that, that’s one of the things she liked,” Owens told the paper, noting that it’s very motivating for him that they’re both in similar arenas and compete in sports at the highest level.

“We’re both super competitive. When I see her getting up and going to practice every morning, it motivates me even more. It’s a great feeling when the person you’re in a relationship with understands what you’re going through,” he said.

Biles, a four-time Olympic gold medalist, earned the Time magazine’s “Athlete of the Year” honor last year. The gymnast traveled to the Tokyo Olympic Games last year with the intent of rewriting the record books, but instead brought about a global conversation around athletes’ mental well-being.

She later returned to the competition, winning a bronze medal on the balance beam after earning the support of her fellow athletes in gymnastics and beyond.