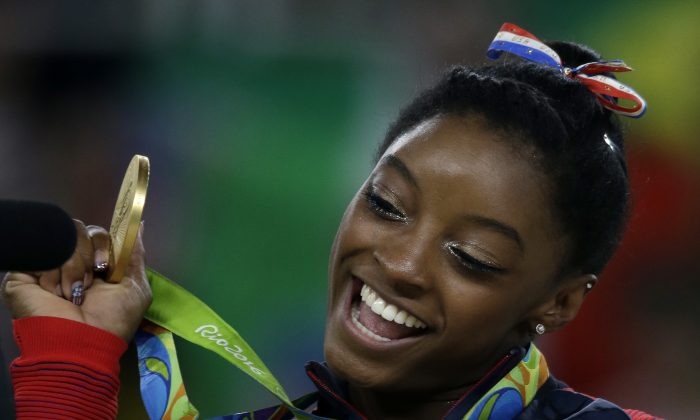 Simone Biles has responded to questions about her health after a hack of the World Anti-Doping Agency (WADA)’s athlete database on Sept. 13, revealed that she uses Methylphenidate, also known as Ritalin, a stimulant drug commonly prescribed to those with Attention Deficit/Hyperactivity Disorder.

Biles revealed on Twitter that she has been diagnosed with it and isn’t ashamed about it.

Having ADHD, and taking medicine for it is nothing to be ashamed of nothing that I’m afraid to let people know.

The leak of Biles’s medical records revealed that she tested positive for Ritalin—a banned WADA substance. However, the agency grants “therapeutic use exemptions” (TUEs) for athletes who take various drugs for medical reasons.

“Simone has filed the proper paperwork per [U.S. Anti-Doping Agency] and WADA requirements, and there is no violation,” Steve Penny, president of USA Gymnastics, said in a statement. “The International Gymnastics Federation, the United States Olympic Committee and USADA have confirmed [Penny’s statement]. Simone and everyone at USA Gymnastics believe in the importance of a level playing field for all athletes.”

Biles isn’t the only Olympian diagnosed with ADHD who competed at this year’s Rio Olympics—Michael Phelps was diagnosed with the disorder at 9-years-old.

In an interview with Everyday Health, Phelps’s mother, Debbie described the early stages of his diagnosis.

“Michael began taking a stimulant medication during the week so he could concentrate in school. During school breaks, I worked with him on behavior modification, instilling structure into his life,” said Phelps.

“He played sports—swimming, baseball, lacrosse, cross-country—which I supported. But he would need to finish his homework before he participated. I also made sure he ate a healthy diet, providing foods with less sugar.”

Tennis superstars Venus and Serena Williams, as well as WNBA player Elena Delle Donne, were also victims of the cyberattack.

Donne also took to social media to defend herself against the hackers, where she sarcastically thanked them for revealing that she “legally takes a prescription.”

According to the World Anti-Doping Agency the attack was carried out by a Russian cyber-espionage group called the Tsar Team.

The actions by the hacking group was condemned by the CEO of the U.S. Anti-Doping Agency, Travis T. Tygart.

“It’s unthinkable that in the Olympic movement, hackers would illegally obtain confidential medical information in an attempt to smear athletes to make it look as if they have done something wrong. The athletes haven’t,” Tygart said.

Tygart added, “The cyberbullying of innocent athletes being engaged in by these hackers is cowardly and despicable. It is time for the entire international community to stand up and condemn this cyber-attack on clean sport and athletes rights.”

The Williams sisters have yet to respond to the targeted attack.

Gabby Douglas Reveals the Medical Condition That Landed Her in Hospital