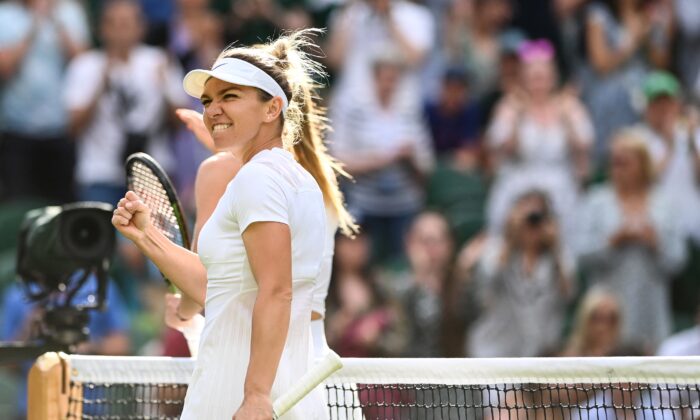 Romania's Simona Halep celebrates winning against Spain's Paula Badosa at the end of their round of 16 women's singles tennis match on the eighth day of the 2022 Wimbledon Championships at The All England Tennis Club in Wimbledon, southwest London, on July 4, 2022. (Glyn Kirk/AFP via Getty Images)
Tennis

Simona Halep took a big step toward her second Wimbledon title on Monday when she trounced fourth-seeded Paula Badosa 6–1, 6–2 to advance to the quarterfinals in London.

The 2019 Wimbledon champion dominated from the outset of the 62-minute match. Halep had 17 winners and just nine unforced errors while running her winning streak at the All England Club to 11 matches.

As for Halep, this is her first Wimbledon since beating Serena Williams in the 2019 final.

The event wasn’t held in 2020 due to COVID-19 and she missed the tournament last year due to a calf injury.

“It means a lot that I’m back in a quarterfinal after I struggled so much with injuries and self-confidence,” Halep said after beating Bodosa. “I’m really happy with the way I’m playing. I’m really confident. It’s a pleasure to be on court.”

Bodosa, from Spain, never found her game and had three times as many unforced errors (21) as winners (seven).

“I think everything went wrong. She played a good match,” Bodosa said. “But I want to talk about me. I think it wasn’t my day today.”

Anisimova, who is 1–2 versus Halep, recorded a 28–9 edge in winners while beating Tan.

Anisimova is the lone remaining American left in the field and she had no expectation of still being alive at this stage of the tournament.

“It’s amazing to be in the quarterfinal here,” Anisimova said afterward. “Going into this, I didn’t think this was possible. It’s a dream come true right now. It’s my first quarterfinal at Wimbledon so I’m just so happy.”

Anisimova has reached the semifinals once in a Grand Slam tournament—the 2019 French Open before losing to eventual champion Ash Barty.

Australian Ajla Tomljanovic and Kazakhstan’s Elena Rybakina will square off in a quarterfinal after also notching victories on Monday.

Tomljanovic reached the quarterfinals for the second straight year by rallying for a 4–6, 6–4, 6–3 win over Alize Cornet of France.

Cornet held a 30–26 edge in winners but gave away points with seven double faults. Eventually, Tomljanovic prevailed in two hours and 35 minutes.

“I didn’t really think I could do it,” Tomljanovic said. “I can’t believe a year later I’m in the same position.”

It is her second career Grand Slam quarterfinal. She also advanced that far at Roland Garros last year.