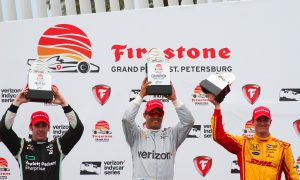 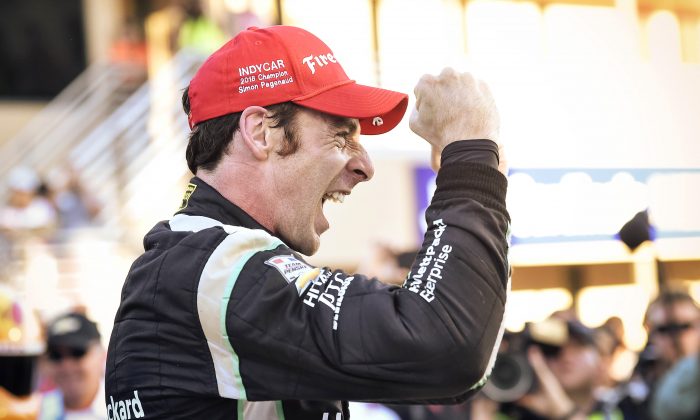 Penske driver Simon Pagenaud won the season-ending race at Sonoma Sunday, Sept. 18, sealing his first IndyCar championship, as team mate and rival Will Power saw his chance for a second title evaporate when his clutch controller failed halfway through the race.

Pagenaud came into the race with a 43-point lead; he was assured the title if he finished in the top five. The 32-year-old Frenchman was not satisfied with that, though. He qualified on the pole with a amazing lap, and led flag-to-flag in the race.

Despite the great probability of his winning, Pagenaud was unprepared to make a speech in Victory Lane.

“So much emotion right now … it’s hard to find the words,” he told NBCSN. “My whole career has been about this, about today and getting to this level.

“Running up front like that when you need it … for an athlete, when you can perform 100 percent under pressure like this is amazing, such a great feeling.

“Obviously it’s me winning but it’s the whole team, the #22 team and Team Penske, the 424 people working in the shop … Thanks to them for doing such hard work so we could shine on the race track.

Before Power’s clutch control unit failed on lap 38 of 85, he was already beaten. Despite his best efforts the 2015 champions couldn’t get within several seconds of his triumphant team mate.

Power who has now finished second in championship points four times, was philosophical about the outcome.

Power told NBSCN he had come into the race weekend with serious hopes for a second championship. The Sonoma finale offers 50 instead of the normal 25 points for a win, and power was 43 points back of his team mate

“It was pretty realistic considering the points situation, double points,” he said. “But that’s just how it flows.

“Simon has done a phenomenal job and he is a very deserving champion. To lead a 1–2–3 in the championship for the team is a great result.

“It’s unfortunate for us that we didn’t really have a shot today.”

The rest of the field fared no better.

Graham Rahal, who finished second, couldn’t get closer than a second to the flying Frenchman, even when Pagenaud was saving fuel. The Rahal Letterman Lanigan Racing eventually had to accept second place, realizing that it was better to score a podium than to wreck trying for the win. Rahal finished fifth in the points with a win at the rerun race at Texas Motor Speedway.

“I wanted to get by Page (Pagenaud) there, obviously, but when I’d get behind him I’d get massively loose, I decided it was best I salvage a second place then to do something stupid.

“It’s been a weird year. We’ve had our ups and down. I am really proud of this Rahal Letterman Lannigan team for all the effort they put in and obviously proud to be the top Honda once again.

Helio Castroneves added excitement to the closing laps with an intense duel with Ed Carpenter Racing’s Joseph Newgarden. Castroneves passed the ECR driver on points by getting onto his tail, but also wanted to pass him on track.

Despite having eight-laps-fresher tires, Castroneves could not find a way by Newgarden, who positioned his car masterfully, never blocking but never giving the vastly more experienced driver a shot at overtaking. 2016 has been a breakout season for Newgarden, who overcame serious injuries after a hard, high-speed crash at Texas to win the Iowa Corn 300 and finish fourth in the points.

Pagenaud’s championship marked the 14th IndyCar title for Penske Racing, and capped a season of success for the team. Penske drivers Simon Pagenaud, Will Power, and Helio Castroneves finished 1–2–3 in the points, with Juan Montoya coming in eighth.

Pagenaud won five races, Power four, while Montoya won the season opener at St. Pete. Team Penske didn’t win at Indy, but ten races out of sixteen might have assuaged some of that disappointment. No other team managed to match the success of even Penske’s top driver, let alone the team.

With the racing season over “Silly Season” starts, and the rumors are already flying about who will end up on which team for next season.

Chief among the popular speculations is that Joseph Newgarden will be heading to Penske from ECR. Pesnke is certainly the more prestigious ride, but the team may be competing with Chip Ganassi, whose Ganasi Racing is generally continued to be the second best outfit on the grid.

Another rumor has indy500 winner Alexander Rossi in talks with Roger Penske. The former F1 driver, now with Andretti Autosport, has driven excellently in what many think haves been substandard equipment in 2016, his rookie year. Rossi finished 11th in points, ahead of 2012 series champ and team leader Ryan hunter-Reay.

Most rumors have Juan Montoya leaving the team, perhaps to head to Foyt Racing—or possibly replacing Newgarden at Ganassi.