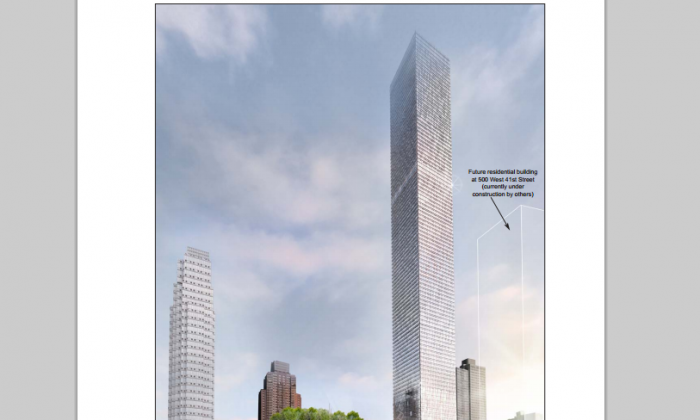 Silverstein Development Corp.’s plans to develop a record setting 106-story supertall tower on the Hudson Yards site would hold 1,400 apartments, about 280 of which would be affordable and 175 of which would be corporate apartments. The 520 West 41st development would require zoning changes.

Renderings were first spotted on real estate blog YIMBY Tuesday and the draft environmental impact statement (EIS) proposes a rezoning change to allow for more residential on what was supposed to be a primarily commercial lot.

The EIS notes that because funding was never secured to extend the 7 train all the way to 10th Avenue, transportation access is not sufficient to make developing more office space on site attractive.

The 1,400-unit tower would hold more units than any other residential building in the city. It would also, YIMBY points out, contain more units than all the other supertall developments in the city, no longer limiting these buildings to luxury units. The developers plan to include affordable housing but have not determined a specific number of units, and the 280 figure is a placeholder amount for the purposes of an environmental study.

Silverstein proposes a start date of 2017 for development of the tower, and occupancy by 2020.

According to the Draft EIS, the development would result in about 224 new elementary and middle school students, triggering a possible need to fund schools, as a detailed study will determine.

The building is also located west of the Saint Raphael’s Croatian Catholic Church, a building “that contains sunlight sensitive features,” and will warrant a study on shadows. The volume of units will also require studies on sewage and water infrastructure, solid waste and sanitation services, and traffic.

The developers expect to generate more than 50 vehicular and 200 subway additional trips at peak hours.