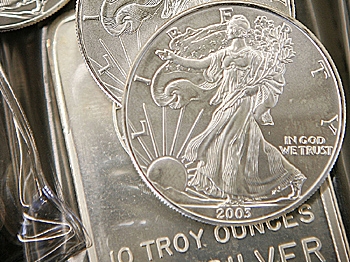 Silver May Rise As Hot Commodity

Heide B. Malhotra
View profile
Follow
biggersmaller
Print
WASHINGTON—The price of silver has risen 188.7 percent over the last 10 years. And over the last year, it has outperformed gold despite far less publicity.

“Silver broke through the $19/oz level on 2nd December, at which point it was a remarkable 102% higher year-on-year. This is far better than gold (55%) managed over the same 12 months, or even platinum (83%),” according to CommodityOnline India Limited, a research and consulting firm.

The Hennessee Group, an advisory firm to hedge fund investors, argues that silver’s market price could be undervalued when compared to gold, and it predicts an upward trend in the value of silver.

“While we see both gold and silver as safe haven investments, particularly as a hedge against the longer term risk of hyper-inflation, we believe gains in silver will outpace gold,” advised Charles Gradante, co-founder of the Hennessee Group, in a statement.

Silver could reach new heights in early 2010, reaching around $22 per ounce, predicted Roger Wiegand, bullion trader and editor of the Trader Tracks Newsletter, in December.

CommodityOnline disagrees with the positive outlook held by a large number of trading and research firms. CommodityOnline suggests that the silver prices should be lowered despite strong investor interest, especially since industrial and traditional production is still not up to pre-crisis levels.

BNP Paribas Fortis metals monthly suggested in its December 2009 edition that silver would outperform gold price increases given silver’s industrial and traditional demand potential. The short-term financial crisis is holding silver in a waiting mode, as people are more attuned to hoarding gold than silver.

“Silver’s long-term future, we believe, rests on new industrial applications, and these are much more likely to happen in a recovering economy rather than a depressed one. In the meanwhile, the silver price will take its cues from gold as seen on 4th December, when it plunged along with the yellow metal back to $18/oz,” according to a BNP Paribas analysis.