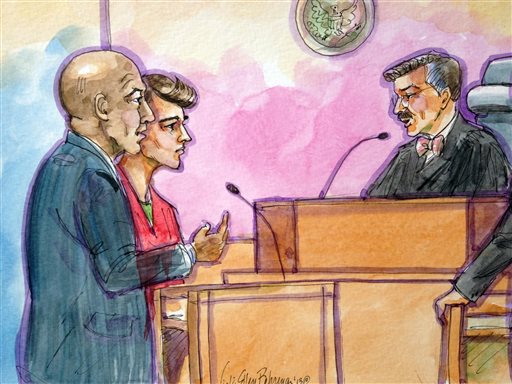 This artist rendering shows Ross William Ulbricht, second from left, appearing in Federal Court with his public defender Brandon LeBlanc, left, in San Francisco on Friday, Oct. 4, 2013. U.S. Magistrate Judge Joseph Spero, right, postponed the bail hearing for Ulbricht who is being charged as the mastermind of Silk Road, an encrypted website where users could shop for drugs like heroin and LSD anonymously. (AP Photo/Vicki Behringer)
Tech

The so-called Silk Road 2.0 website was recently launched–a successor to the Silk Road, a black market drug hub accessible via Tor that was shut down weeks ago by the FBI.

The Silk Road 2.0 came online on Wednesday morning and is said to be slightly improved over the original website, according to Forbes. The website will attempt to keep the identities and personal information of users a secret by being only accessible through Tor, an anonymizing service.

Nearly 500 drug listings were placed on the website already, including marijuana, cocaine, and ecstacy. Old discussion threats were also re-posted.

But as The Verge notes, new signups to the website are not being accepted and only existing community members can join.

The administrator for the website has called himself Dread Pirate Roberts, which was the moniker used by the original Silk Road founder, Ross Ulbricht, before he was arrested by the FBI.

“#SilkRoad is back up. Deja vu anyone? #weriseagain,” reads a tweet from a Dread Pirate Roberts account. “Our server has just had a phenomenal spike – bare with us,” the account later stated.

It added: “20 minutes to go. You can never kill the idea of #silkroad.”