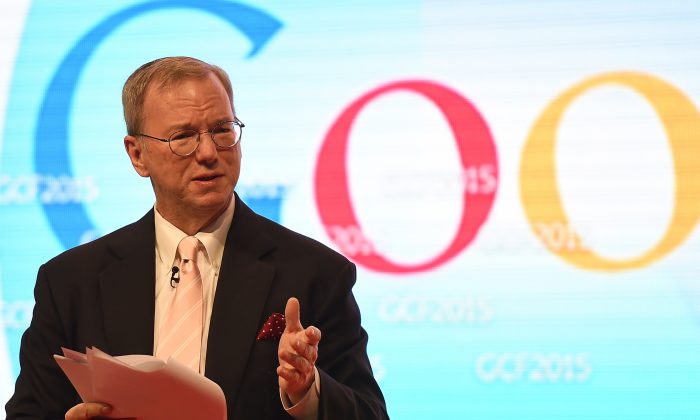 Google's Executive Chairman Eric Schmidt had corresponded with Steve Jobs over email in 2006 on how to get Apple and Google to stop competing for workers, shown here in Riyadh, Saudia Arabia on January 26, 2015. (FAYEZ NURELDINE/AFP/Getty Images)
Business

A California judge this week signaled that she was willing to approve a $415 million offer to settle a class action lawsuit brought against some of Silicon Valley’s largest companies for collusion to suppress the wages of tech workers.

Google, Apple, and other companies are accused of cheating some 60,000-plus workers out of more than $9 billion in wages between 2004 and 2009 by agreeing to “anti-poaching” pacts to prevent companies from competing for workers, which are illegal under U.S. antitrust law.

Court documents show that Apple founder, the late Steve Jobs, Google Chairman Eric Schmidt, and other top-level executives negotiating over email on agreements to not recruit each others’ employees.

The collusion to suppress the wages of tech workers was first flagged in 2010, when the Justice Department reached an agreement with six tech giants, four of which are in Tuesday’s settlement, to halt anti-competitive activities.

However, the efforts to drive down the salaries of Silicon Valley engineers are far from over, and the industry has only ramped up efforts in recent years to suppress the wages of workers through other means.

One narrative generated by tech lobbyists is that the tech industry has long suffered from a dire shortage of talent, and that immigration programs that recruit tech workers from overseas were due to expansion.

“Why do we offer so few H-1B visas for talented specialists that the supply runs out within days of becoming available each year, even though we know each of these jobs will create two or three more American jobs in return?” Facebook CEO Mark Zuckerberg wrote in 2013.

That year, Zuckerberg and other top tech executives founded FWD.us, an advocacy group focused on immigration reform. It was quickly able to raise more than $50 million for lobbying efforts, and bought television ads promoting pro-immigration candidates in the run-up to the 2014 midterm elections.

The election saw Republicans gain control of both chambers of Congress, ruling out the possibility of legislative reform. In response, President Obama acted on his own with respect to immigration. But his new deferred action programs did little to expand the supply of H1B-visas, a major vehicle for recruiting tech workers from overseas. Thus, the clamor for more tech workers continued.

In December, Y-Combinator, a seed accelerator company, founder Paul Graham wrote an ominous plea for immigration reform, warning that in its absence, the torch of technological supremacy could be passed on from the United States to another country.

“We have the potential to ensure that the United States remains a technology superpower just by letting in a few thousand great programmers a year,” wrote Graham, who’s listed as a major contributor to FWD.us. “What a colossal mistake it would be to let that opportunity slip. It could easily be the defining mistake this generation of American politicians later become famous for.”

Yet the available evidence suggests that Silicon Valley isn’t running out of great workers, but running out of great ideas. Many of the largest tech companies are sitting on mounds of cash with few investment opportunities to spend it on. Last April, Apple announced that it would return $130 billion to investors via stock buybacks by the end of 2015, after facing pressure from activist investors like Carl Icahn.

We have the potential to ensure that the United States remains a technology superpower just by letting in a few thousand great programmers a year.
— Paul Graham, founder of seed accelerator company,, Y-Combinator

Oracle also announced a $13 billion buyback scheme in September, and in total 8 of the 10 largest tech companies announced buyback plans in 2014, according to the Mercury News.

A shortage of engineers should see a concomitant rise in wages as employers seek better talent, but the industry has seen no such uptick in pay in recent years.

Hal Salzman, an economist at Rutgers, and other researchers have concluded that the labor market for engineers evinces no patterns that would suggest an overall shortage, and that real shortages in select industries are quickly adjusted internally as wages rise.

“Over the past decade IT employment has gradually increased, but it only recovered to its 2000–2001 peak level by the end of the decade,” wrote Salzman in a 2013 research paper. “Wages have remained flat, with real wages hovering around their late 1990s levels.”

One area that has seen a real shortage in qualified workers has been the oil industry. The late ’90s saw a large cohort of petroleum engineers aging into retirement. Many had joined the industry in the aftermath of the 1973 oil crisis, when higher prices made extraction efforts in North American profitable.

Rising oil prices in the 2000s fueled an extraction boom in North America, and the shortfall of oil workers saw a sharp increase in wages. The starting salary for a petroleum engineer nearly doubled from $43,674 in 1997 to $86,220 in 2010. In turn, the number of college major in that field swelled.

“The result of rapidly increasing starting salaries was that the number of graduates more than doubled over four years. Reports from some petroleum engineering programs show an even greater increase in demand in the past two years,” Salzman wrote in a 2011 paper. “The increased demand was largely satisfied by American students.”

Meanwhile, California has recently seen a high-profile case where the H1-B was found to not add more engineers to the workplace, but used to replace American ones. Southern California Edison saw protests outside its offices in Irvine after it laid off more than 400 workers.