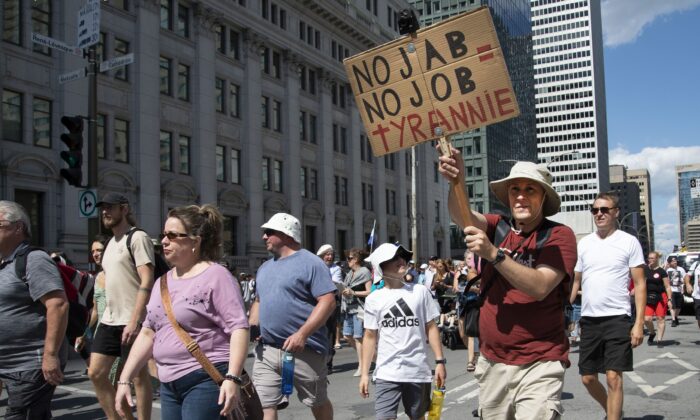 Protesters march against Quebec’s decision to impose a vaccine passport system across the province starting Sept. 1, in Montreal on Aug. 14, 2021. (The Canadian Press/Peter McCabe)
Viewpoints

A new poll confirms that Canadians distrust their unvaccinated fellows. Whatever happened to faith in one another? Or skepticism about authority? Do we expect to flourish as a nation of angry sheep? Baaaa humbug.

I probably must repeat the disclaimer that I am vaccinated. Despite qualms about the massive use of untested mRNA technology and skepticism about the wisdom or honesty of those in power, I figured the risk was probably lower than from COVID. But it doesn’t mean I think the vaccines are magic.

Indeed, while I was writing, newswires reported that former U.S. secretary of state Colin Powell died from COVID complications. The stories hurried to assure us he was fully vaccinated, not some angry loser kook who didn’t believe the science and then died. That COVID killed him anyway was apparently not relevant.

Not to me. My second thought, after RIP, was I guess the vaccines don’t work very well. As I also wonder whether wearing T-shirts over our faces is medically sound. And whether asking intelligent questions is not merely a permitted luxury but a civic duty.

Again, I grant that in the initial crisis it made sense to comply first and question second. But surely second has arrived.

Recently a friend sent a video of an immunology professor denouncing these vaccines for their largely unknown hazards and as “garbage” that doesn’t protect you. And no, thinking vaccines should work does not make me an “anti-vaxxer,” something now routinely linked with being a “climate denier” (and a “misogynist,” to hear former Canadian Minister of Climate Change Being the Worst Thing Ever Catherine McKenna tell it.) But nowadays a host of issues, including Alberta’s equalization referendum, are liable to provoke sneers, not syllogisms.

Such an attitude worsens the problem it seeks to address. Widespread resistance to COVID vaccination is driven partly by a pervasive breakdown in trust that will not be repaired by the authorities and a fairly sizeable mob trying to teach their fellows a sharp lesson about not being team players.

If people are genuinely deranged about vaccines, from non-existent side effects to non-existent conspiracies, it is important to refute their arguments. You may even scoff. But it is not important to silence debate over whether some unorthodox treatments for COVID might work, whether some orthodox treatments are dubious, whether we must sacrifice our rights in this permanent crisis, etc.

Remember, weak arguments will not prevail in open debate.

Remember, weak arguments will not prevail in open debate.

I did. But I’d forgotten that this passage leads right into another Orwell zinger: “If liberty means anything at all, it means the right to tell people what they do not want to hear.”

Not the right to force them to listen, of course. Let alone compel speech, I remind a certain Canadian court. But to benefit from free speech we must be able to hear and also willing to listen, and if we end up not agreeing, to explain why instead of hurling insults or asking the government to shut or lock them up.

For instance, I’m actually not a big fan of the religious exemption argument. So here’s my reason: Broadly speaking, conscience rights let you avoid certain activities at the cost of foregoing their benefits. But if God tells you to burn tires in your yard, Caesar rightly tells you not to.

In return I claim the right to ask whether the mandates violate our liberties and, if so, whether it’s justified by some real and pressing need. In Canada instead, under Section 1 of our charter, we routinely say sure, our freedom was infringed, but the authorities felt like it so it’s OK. And it’s remarkable how, although our founding myth now seems to revolve around Galileo, we erupt with fury if anyone challenges prevailing wisdom. Could it be guilty conscience?

If not, try asking why we force waitpersons to mask to serve unmasked customers. Or make everyone prove vaccination before boarding a plane then wear non-medical masks anyway. And why just COVID? Why not whooping cough or polio? Or this business of using hand sanitizer until our skin bleeds despite minimal surface transmission risk.

To some extent the idea seems to be that as soon as we slap those clods around hard enough that they comply, we can go back to being free-thinking individualists, so stop asking questions and start hitting. But this plan strikes me as highly dubious, as counterproductive in the short run as it is ominous for the future.

Moreover, I trust you agree.