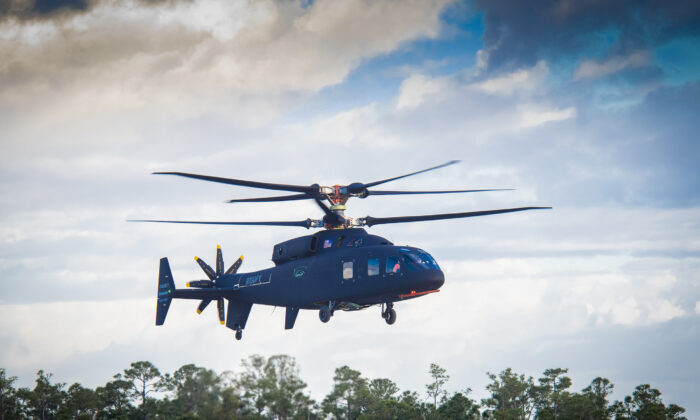 Sikorsky’s Black Hawk Replacement Demo Gets up to 100 Knots

Sikorsky’s Black Hawk demonstration replacement has reached over 100 knots in a test flight, as it prepares to go head to head with rival Bell in a final two-year contest to make the Army’s next-generation, 250-knot flying machine.

Bell already got their demonstration tilt-rotor machine, the V-280, up to 300 knots last year, well ahead of the final competitive process which starts in the spring of this year.

Both are competing for the FLRAA (Future Long-Range Assault Aircraft) program, which is one of 31 modernization programs to refit the Army ready for great power competition with China and Russia.

With twice the speed and three times the range of the current 40-year-old Black Hawk, the Army’s tough future requirement means starting with a clean design sheet.

Sikorsky released footage of the SB1-Defiant at the test center in West Palm Beach, Florida, on Jan. 17.

“The Sikorsky-Boeing #SB1-Defiantcontinues to expand its flight envelope through sorties each week, executing the mission elements required for Future Vertical Lift, most recently exceeding 100 knots and performing maneuvers at 30 degrees angle of bank,” said the company in a statement.

Bell’s V-280 already had 150 hours of flight time under its belt and had reached 300 knots of true airspeed at the end of last year, before it performed a successful demonstration of autonomous flight at the end of December.

Like the Defiant, Bell’s offering also looks little like a conventional helicopter, building on the tilt-rotor platform of the V-22 Osprey, which has already been in service with the Marine Corps for several years.

Conventional helicopter design bumps up against a natural speed barrier that limits them typically to around 150 knots—something called “retreating blade” stall.

This means that as the aircraft moves faster, the side of the rotor spinning forward gets more and more lift, and the other side (the retreating side) gets less and less lift.

The Defiant solves this by having two rotors, spinning in opposite directions, canceling out the lopsided lift.

The Valor 280 essentially switches into a propellor plane mid-flight, by tilting its rotors forward.

“The big benefits of a tilt-rotor configuration are that you have a wing,” Valor’s chief engineer Paul Wilson previously told The Epoch Times. “Wing-born flight is highly efficient in terms of speed and range.”

That range and speed are essential for the Army’s vision.

Like everything else in the Army modernization plan, the FLRAA and the broader Vertical Lift program are cogs in a military machine that must first drill out the anti-aircraft safe thrown up in recent years by Russia and China.

Once that is disintegrated, the new FLRAA aircraft, capable of carrying at least 12 soldiers, come into play.

The requirements for longer range and speed—three times that of its predecessor—are needed because of the distance created by the long reach of adversaries’ defense systems.

“Once we penetrate and then disintegrate that air defense system, think about a fleet of vertical lift aircraft that can come through there at 280 knots or more, and deliver a battalion’s-worth of soldiers on the objective to really exploit that window that we open up,” James Thomson, deputy director of the Army’s Future Vertical Lift team, previously told the Epoch Times.