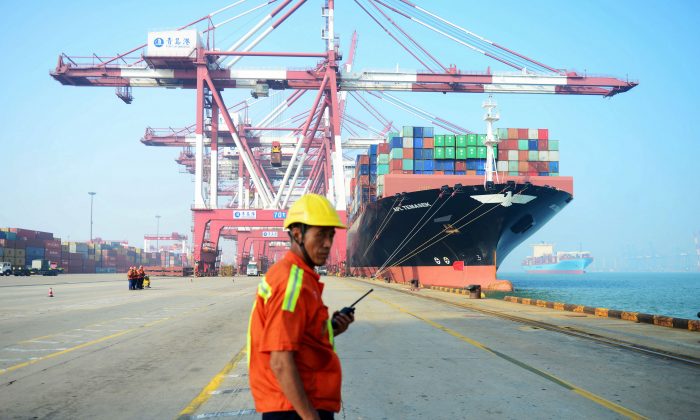 A Chinese worker looks on as a cargo ship is loaded at a port in Qingdao, Shandong Province, China on July 13, 2017.(STR/AFP/Getty Images)
US-China Relations

In the latest escalation of trade disputes between China and the United States, the Trump administration announced on July 10 a new list of imported Chinese goods that will be subject to 10 percent tariffs. The total value of the goods subject to the tariffs is $200 billion.

Before this latest set of tariffs becomes effective, the U.S. administration is seeking public comment until the end of August. However, the ongoing trade spat is already having a negative impact on China.

President Donald Trump had previously warned that he would impose these additional tariffs should China retaliate against the first batch of tariffs the United States imposed, which went into effect last week on July 6. China quickly retaliated with its own tariffs on American goods, mostly agricultural products.

“For over a year, the Trump administration has patiently urged China to stop its unfair practices, open its market, and engage in true market competition,” U.S. Trade Representative Robert Lighthizer said in a statement.

“Rather than address our legitimate concerns, China has begun to retaliate against U.S. products. … There is no justification for such action.”

On July 11, China quickly issued a statement saying they will retaliate, though it is as yet unclear how. The value of goods China imports from the United States was just over half of $200 billion in 2016, according to the Office of the United States Trade Representative.

Foreign companies in China are already nervous about the potential repercussions of the trade tariffs on their bottom lines.

In a recent interview with Japan’s Kyodo News Agency, Mitsubishi Electric CEO and President Takeshi Sugiyama said the company will cancel buying auto parts from China and instead import from Thailand and other countries.

He added that he was worried about the impact of the tariffs on global supply chains and hoped that the two countries will resolve their differences soon.

Meanwhile, Mats Harborn, president of the European Union Chamber of Commerce in China, said several European firms that export from China are changing the global flow of their goods to avoid getting hit with higher American tariffs.

Companies are “scrambling to readjust supply chains” so U.S.-bound goods don’t have to pass through China, Harborn said at a news conference, according to a July 9 report by The Associated Press. He said one firm has already shifted its final assembly of goods to a newly created American unit instead.

Chinese financial markets have been reeling from the trade tensions, amid an economy that is already suffering from a slowdown. Since tariffs were initially proposed by the U.S. administration in January, the six months of wrangling over trade negotiations have wiped out about a fifth of China’s stock market value.

Japanese magazine Gendai Bijinesu also offered an analysis that outlined China’s main disadvantages in this trade showdown: China’s GDP is about 63.2 percent of that of the United States, so these tariffs would hurt China in the long run. China’s financial markets are also more volatile, and the country lacks support from the international community.

Ahead of a China–European Union summit to be held in Beijing on July 16 and 17, top Chinese officials have been meeting with EU officials in Brussels, Berlin, and Beijing—seeking to rally support.

Vice Premier Liu He and China’s top diplomat, State Councillor Wang Yi, are among those trying to convince the EU to join its side and launch a joint action against the United States’ trade policies, five EU officials and diplomats told Reuters recently.

One such proposal would be to have China and the EU jointly take action against the United States at the World Trade Organization. However, EU officials rejected the idea, according to those sources.

While Chinese Premier Li Keqiang visits Germany this week, he has sought to gain Germany’s backing, making barbed comments that appear to address the trade tensions. “We are against unilateralism,” he said on July 9.