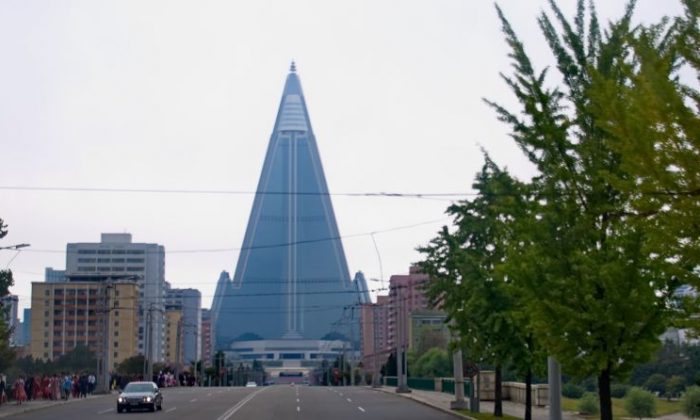 The iconic, strange-shaped hotel in the heart of the North Korean capital showed some signs of activity in recent days.

Unofficially called “Hotel of Doom” by British tabloids, the 105-story Ryugyong Hotel in Pyongyang may be under construction again. Trucks were stopped near the pyramid-like building as well as other nearby buildings, according to MailOnline.

New photos that have surfaced show cranes near the hotel, the Mail reported.

The hotel, which is 1,080-feet-tall, cost some $552 million to date but hasn’t housed a guest. Construction of the building started in 1987 but was stopped in 1992 when North Korea entered a period of economic crisis after the collapse of the Soviet Union.

I've lost track how many times work has restarted on Ryugyong Hotel. Also 'Hotel of Doom' is a stupid nickname https://t.co/taWIS5HNjD pic.twitter.com/POtPR5z8K6

I've just discovered the existence of N Korea's Ryugyong Hotel – it remains unfinished after 30yrs of construction. Quite the building… pic.twitter.com/5PSXgl68BQ

German tourist Till Mosler, who visited the capital recently, said that guides boasted of plans to open the hotel.

“During my stay I realized some work activity around the entrance hall and surroundings. It seems the area around the huge building will be prepared. ‘Also our Korean guides told us that there might be plans to open some parts of the building for public or offices. But not the whole building so far as they know,” he said.