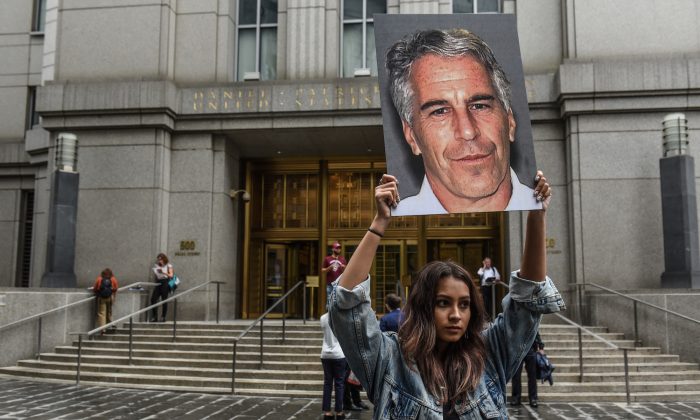 A protest group called "Hot Mess" hold up signs of Jeffrey Epstein in front of the federal courthouse in New York City on July 8, 2019. (Stephanie Keith/Getty Images)
US News

Jeffrey Epstein, the multimillionaire who had recently been indicted on charges of sex trafficking, has been found dead of an apparent suicide in his jail cell. According to a statement from the Department of Justice’s Federal Bureau of Prisons, “Epstein was found unresponsive in his cell in the Special Housing Unit from an apparent suicide at the Metropolitan Correctional Center” in New York City at 6:30 a.m.

The Associated Press reported that “Fire officials received a call at 6:39 a.m. Saturday that Epstein was in cardiac arrest, and he was pronounced dead at New York Presbyterian-Lower Manhattan Hospital.”

The FBI is now investigating the incident.

Jerry Dunleavy, a reporter at the Washington Examiner, spoke by phone with the Spokesperson for NYC’s Office of Chief Medical Examiner, who told him: “We are investigating the cause of death and we have an open case. There is no official cause of death yet—the medical examiner has to do their job.”

The immediate question is how it was possible for a man supposedly under suicide watch, to take his own life—particularly as there had already been one potentially life-threatening event. On July 24, 2019, it was reported that Epstein had been found on the floor of his cell, “semi-conscious, despondent and crying with slight bruising around his neck.”

At the time, CBS News reported that a “source said it was not clear whether his injuries were self-inflicted, but that Epstein was put on suicide watch at the correctional facility as a precautionary measure.”

Following the July 24 incident, a source told NBC News that authorities were questioning another inmate, Nicholas Tartaglione, reportedly Epstein’s cellmate. Tartaglione is a “former police officer in Westchester County who was arrested in December 2016 and accused of killing four men in an alleged cocaine distribution conspiracy.”

Although details of the June 24th event remain murky, all reporting indicated that Epstein had been placed on suicide watch following the incident. However, a source told the Associated Press on Aug. 10, following Epstein’s death, that he had been taken off suicide watch. According to the AP, the source wasn’t authorized to discuss the matter publicly and spoke on condition of anonymity.

The federal prison where Epstein was housed, the Metropolitan Correctional Center in Lower Manhattan, has a suicide prevention program designed for at-risk inmates. Why Epstein, an extremely high profile inmate, was taken off suicide watch remains unknown.

According to Bloomberg, a “person familiar with the matter” said Epstein “was taken off suicide watch just hours before he killed himself,” but other reporting has contradicted this timing and claims that Epstein was removed from suicide watch at the end of July.

Additionally, Reuters has reported that while “two jail guards are required to make separate checks on all prisoners every 30 minutes,” that “procedure was not followed overnight.”

Notably, the Bureau of Prison guidelines require that a written justification of an individual’s removal from suicide watch be provided:

“Once an inmate has been placed on watch, the watch may not be terminated, under any circumstance, without the Program Coordinator or designee performing a face-to-face evaluation.”

According to the guidelines, “[o]nly the Program Coordinator will have the authority to remove an inmate from suicide watch.”

A report, required to be completed before the prisoner is removed from watch, is then shared with “the central file, medical record, psychology file, and the Warden.”

Attorney General William Barr responded to Epstein’s death in a statement, saying there would be at least two investigations into his death.

“I was appalled to learn that Jeffrey Epstein was found dead early this morning from an apparent suicide while in federal custody. Mr. Epstein’s death raises serious questions that must be answered. In addition to the FBI’s investigation, I have consulted with the Inspector General who is opening an investigation into the circumstances of Mr. Epstein’s death,” Barr said.

It is now likely there will be at least three separate investigations into Epstein’s death—one from the FBI; another from the DOJ Inspector General; and finally, one from within the Southern District of New York (SDNY), the court district involved in Epstein’s case and incarceration.

In Congress, several calls for inquiry have also already been issued, including from Sen. Ben Sasse (R-Neb.), who had previously urged the Justice Department to revisit the handling of Epstein’s controversial 2008 plea agreement.

In a statement, Sasse said that “as a matter of public policy, the government has failed these girls yet again. It is inexcusable that this rapist was not under constant suicide watch. These victims deserved to face their serial abuser in court.”

Florida Sen. Rick Scott (R-Fl.) echoed Sasse’s sentiments and demanded answers, in a statement of his own:

“The victims of Jeffrey Epstein’s heinous actions deserved an opportunity for justice. Today, that opportunity was denied to them. The Federal Bureau of Prisons must provide answers on what systemic failures of the MCC Manhattan or criminal acts allowed this coward to deny justice to his victims.”

Preet Bharara, the former U.S. Attorney for New York, claimed that “There should be—and almost certainly is—video of Epstein’s suicide at MCC. One hopes it is complete, conclusive, and secured.”

One of Epstein’s lawyers, Marc Fernich, also called for “a full investigation into the circumstances surrounding Mr. Epstein’s death. The public needs to know exactly what happened and why—and how his custodians could have let it occur,” reported Fox News.

According to The Washington Post, “People close to Epstein, noting that he seemed recently to be in good spirits, were surprised by reports of suicide, according to one person familiar their discussions early Saturday, and expressed concern about the possibility of foul play.”

Bradley Edwards, an attorney representing several of Epstein’s accusers, said in a statement that:

“The fact that Jeffrey Epstein was able to commit the selfish act of taking his own life as his world of abuse, exploitation and corruption unraveled is both unfortunate and predictable. While he and I engaged in contentious legal battles for more than a decade, this is not the ending anyone was looking for. The victims deserved to see Epstein held accountable, and he owed it to everyone he hurt to accept responsibility for all of the pain he caused.”

Another victim released a statement through her attorney, Lisa Bloom, saying: “I will never have a sense of closure now. I’m angry as hell that the prison could have allowed this to happen and that I and his other victims will never see him face the consequences for his horrendous actions.”

“I hope that whoever allowed this to happen, also faces some type of consequence. You stole from us, the huge piece of healing that we needed to move on with our lives.”

Epstein, reportedly worth upwards of $500 million, was facing life in prison. His case had captured national attention and was shaping up to be one of the highest-profile cases in recent history.

Epstein’s death follows the Friday release of more than 2,000 pages of documents (some of which can be found here and here) related to a now-settled lawsuit against Epstein’s ex-girlfriend, Ghislaine Maxwell, by Virginia Giuffre, one of Epstein’s accusers.

Giuffre claimed that “she was “forced” to have sex with Harvard law professor Alan Dershowitz, “model scout” Jean Luc Brunel, and “many other powerful men, including numerous prominent American politicians, powerful business executives, foreign presidents, a well-known Prime Minister, and other world leaders,” according to court documents.

None of the men named in Guiffre’s deposition have been charged with any crime and the court documents did not contain any corroboration or further details, although many documents remain sealed.

Manhattan U.S. Attorney Geoffrey Berman released a statement regarding the Epstein case, in the afternoon following his death noting their intent to keep the Epstein investigation open and ongoing:

“Today’s events are disturbing, and we are deeply aware of their potential to present yet another hurdle to giving Epstein’s many victims their day in Court. To those brave young women who have already come forward and to the many others who have yet to do so, let me reiterate that we remain committed to standing for you, and our investigation of the conduct charged in the Indictment—which included a conspiracy count—remains ongoing.”

The inclusion of a conspiracy count is significant from a legal perspective, indicating the investigation does not end with Epstein’s death. And as noted by CNN reporter Shimone Prokupecz, “anyone who was hoping to get a good deal by cooperating against Epstein may have lost that opportunity.”