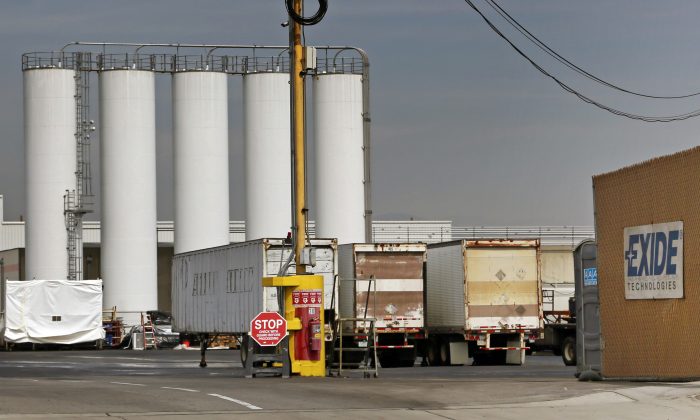 In the wake of a closed battery recycling plant in Vernon, a push to expand regulations and testing
By Sarah Le

LOS ANGELES—Harmful lead exposure in the United States has steadily decreased since the 70s and 80s due to increased regulation, but experts on Wednesday said hotspots remain in places like Los Angeles County.

“There is a significant probability of severe contamination throughout the LA Basin,” said Brian Johnston, MD, Chair of the Department of Emergency Medicine at White Memorial Medical Center.

Dr. Johnston spoke with other experts in environmental toxicology and public health at a community forum on toxic metals in Los Angeles on August 10.

The toxicity of lead, especially to children under six, is well established. Studies have shown adverse health effects at very low concentrations, and the Centers for Disease Control (CDC) has stated that there is no known safe blood lead level in children. Lead affects brain development and contributes to a wide range of problems such as ADHD, high blood pressure, and cancer.

Of major concern in Los Angeles County is a battery recycling plant run by Exide Technologies in Vernon that was forced to close last year to avoid criminal prosecution. The plant was allowed to operate under a temporary permit and spew illegal amounts of lead and other toxins such as arsenic into the air for more than 30 years.

Yet official soil testing has been limited to a circular area 1.7 miles away away from the plant. Dr. Johnston would like testing to extend for 30-40 miles, based on an ENVIRON report, revised in 2013, assessing cancer risk from the site.

“We need to know, how far does it go? We should be looking all over the county,” he said.

Jane Williams agrees. She is a member of the Exide Community Advisory Committee and the executive director of California Communities Against Toxics. She said additional testing extending 2.5 miles away from the Exide site has not found the expected reduction in lead levels.

Williams said it is likely some of the lead contamination comes from other sources in Los Angeles, and government agencies have underestimated the problem.

“We’ve under-regulated lead. We did not correctly identify it as a super-pollutant,” she said. “This is a huge public health problem.”

There is one battery recycling plant still operating in Los Angeles County today in the City of Industry. On July 26, the California Department of Toxic Substances Control ordered the Quemetco plant to correct violations of its own, including fixing a hole in the wall of its hazardous waste containment building.

The impact of “ghost” smelters, or leftover lead contamination from a total of seven other former lead smelting sites in the 30s and 40s in the Los Angeles area, also may not have been fully assessed or acknowledged by government agencies, according to research published by USA Today in 2012.

In addition, dust from old, lead-based paint, water flowing through old lead-containing pipes, and items such as toys, candies, and ceramics from other countries may compound residents’ lead exposure.

“Lead and arsenic do not become less toxic over time,” said Dr. Johnston. “If we don’t act, millions will suffer and die prematurely.”

The CDC considers a blood lead level of 5 mcg to be concerning, while studies have found negative impacts on children’s brain development at 1 to 2 mcg or lower.

“The standards we have now are obsolete,” said Dr. Lanphear. “There’s few things more cost-beneficial than protecting children’s brains, because when you damage children’s brains, it has lifelong implications. It reduces their ability to function, to contribute to society.”