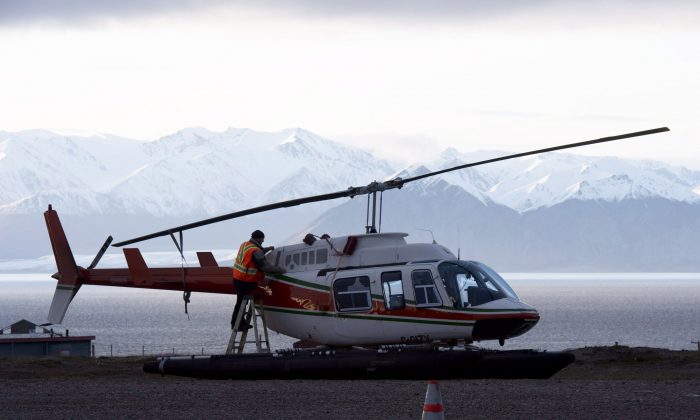 A worker checks on a helicopter at the airport in Pond Inlet, Nunavut, Aug. 23, 2014. A government advisory group is calling for significant investment in northern infrastructure. (THE CANADIAN PRESS/Adrian Wyld)
Canada

A government advisory group is calling for significant investment in northern infrastructure that would include tax breaks to companies setting up shop in the territories.

The National Aboriginal Economic Development Board says a lack of adequate ports, airport runways, roads, bridges, and reliable access to the Internet keeps communities from developing sustainable economies in Yukon, the Northwest Territories, and Nunavut, as well as in Nunavik in northern Quebec and Nunatsiavut in Newfoundland and Labrador.

“Much of the current stock of infrastructure is in poor shape and is at risk of also being impacted by climate change,” says a report released Jan. 20.

“It will not be enough to just patch up the existing stock of infrastructure … that does not even adequately meet current needs.”

The board, which advises the federal government on indigenous economic development, says “bold investment” is required, but it doesn’t attach a price tag. Instead, it focuses on the benefits of government investment and argues that every dollar spent on northern infrastructure returns $22 to Ottawa in economic spinoffs.

The report also recommends the Liberal government offer some tax incentives to companies that set up operations in the North to “level the playing field.” While residents can claim a tax deduction of $8.25 a day, there is no comparable tax break for industry.

Hilda Broomfield Letemplier, chairwoman of the board’s northern sub-committee, said a tax break would take into account that industries which settle in the North have significant out-of-pocket expenses before they are able to turn a profit.

The remoteness of some locations—coupled with a harsh climate, lack of infrastructure, and small population—make it much more expensive and less attractive for industry, she said.

“We’re at rock bottom. The expense is so high to get started, it takes a long time for them to realize any benefits.”

During last fall’s election campaign, Prime Minister Justin Trudeau promised to spend an additional $60 billion over 10 years on infrastructure projects. The time is right for some of that funding to flow north, Broomfield Letemplier suggested.

“We’re so far behind, it’s going to take a bit to bring us up to par with the rest of Canadians. The political will is there. Now is the time for us to really move forward.”