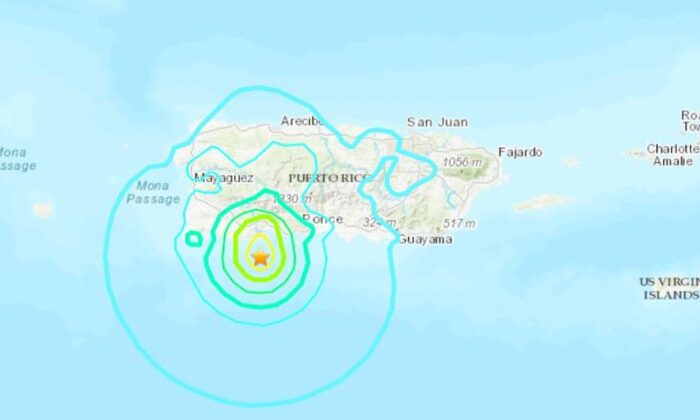 The U.S. Geological Survey (USGS) reported that the tremor hit at around 5:30 a.m. local time.  (USGS)
US News

The U.S. commonwealth of Puerto Rico was hit by a 5.8 magnitude earthquake on Monday morning, according to the U.S. earthquake monitoring agency.

The U.S. Geological Survey (USGS) reported that the tremor hit at around 5:30 a.m. local time.

It was centered around eight miles south-southeast of Indos, striking at a depth of 3.7 miles beneath the ground.

According to CNN, Director of Emergency Management Carlos Acevedo said that least two homes collapsed in Guanica. One of the houses was previously abandoned.

Some earthquake victims posted photos of cracks on the walls of their homes following the earthquake.

“This is one of the strongest quakes to date since it started shaking on Dec. 28,” Angel Vazquez, the emergency management director for the Puerto Rican southern coastal city of Ponce, told The Associated Press. “It lasted a long time.”

Dr. Sindia Alvarado, a local, told the AP she “thought the house was going to crack in half” when the tremor hit. “My entire family woke up screaming,” she added to the AP.

Geologists warned there may be aftershocks following the quake.

It advised locals “to be aware of the possibility of aftershocks, especially when in or around vulnerable structures such as unreinforced masonry buildings.”

“This earthquake could be part of a sequence. An earthquake sequence may have larger and potentially damaging earthquakes in the future, so remember to: Drop, Cover, and Hold on,” the website said.

The USGS also forecasted that there is a 5 percent chance of one or more aftershocks in the vicinity of the quake that are larger than magnitude 5.8. But it stressed that the “chance of an earthquake of magnitude 3 or higher is 91 percent.”

“Our forecast changes as time passes due to decline in the frequency of aftershocks, larger aftershocks that may trigger further earthquakes, and changes in forecast modeling based on the data collected for this earthquake sequence,” the agency wrote.

The previous earthquakes started at around Dec. 28 and ranged in magnitude from 4.7 to 5.1 on the Richter scale, according to AP. Some minor damage was reported.

In 1918, a 7.1 magnitude earthquake hit the island and killed around 100 people and caused a significant amount of property damage.