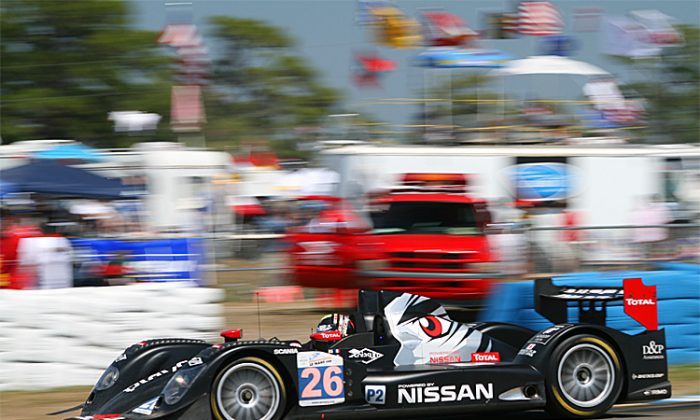 Signatech will be back to defend its P2 title with its Nissan-Powered Oreca. (James Fish/The Epoch Times)
Motorsports

After winning the P2 class of the Intercontinental Le Mans Cup LMP2 in 2011, Signatech-Nissan is returning with renewed confidence to defend its title in the 2012 World Endurance Championship.

For its fourth season in endurance racing the French team will again campaign its reliable Oreca 03 powered by a Nissan V8. Drivers for the 2012 WEC season will be Franck Mailleux, Olivier Lombard and Jordan Tresson.

Signatech will enter a second car for the Le Mans 24—though the driver lineup has not been announced.

“I am delighted to continue with Signatech and Nissan,” said Franck Mailleux on the Signatech website. “We did wonderful things in 2011. We have a title to defend! I am ready to do it again with my new teammates.

“I am extremely familiar with the car and the team is like a second family to me. We have already started preparing for Sebring.”

“My 2011 LMS P2 title was a good card to play to get me onto the Signatech-Nissan team,” said Olivier Lombard on the team’s site. “It fits in well with their 2011 ILMC crown.

“My goal will be to learn from Franck about the circuits where I haven’t raced. The team has a lot of experience and joining with them gives me huge motivation.”

Jordan Tresson went from playing video games to driving racing cars with Nissan’s GT Academy. He will take over the seat occupied last year by 2008 GT Academy champ Lucas Ordonez. Tresson said, “Learning everything I needed to know about motorsport in a single season wasn’t easy, but I managed to win the GT4 title last year.

“I am proud to take over for Lucas Ordonez, and I am, really excited to be joining the championship-winning Signatech-Nissan squad. It’s a thrill to be competing in a world championship after only one year in endurance racing. It’s a huge challenge for me, but one I am ready to face.”

The No. 23 Signatech Nissan will make its racing debut at the 12 Hours of Sebring, March 17.