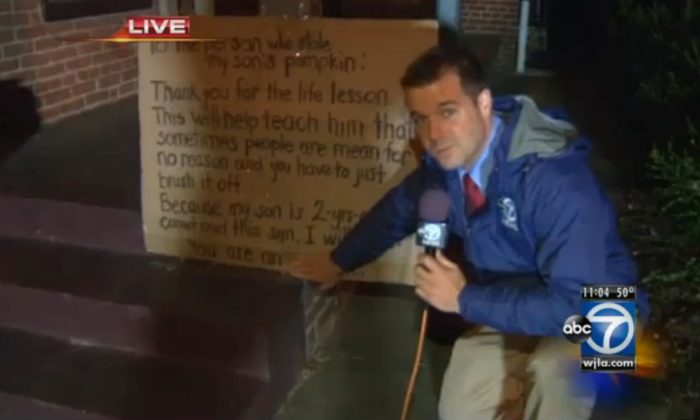 A sign to a pumpkin thief in Washington, D.C., was posted out in front of a local woman’s home. The sign to the thief sent a clear message.

“To the person who stole my son’s pumpkin: Thank you for the life lesson, this will help teach him that sometimes people are mean for no reason, and you have to just brush it off. Because my son is two years old and cannot read the sign, I will add, you are an [expletive],” wrote 33-year-old Becky Reina, according to ABC.

She told the network that the pumpkin was for her 2-year-old son, Tommy.

“It was just the mom in me that got upset,” Reina ABC. “I figured the sign would be a way to make me feel better and also distract him.”

She described why she made the sign to WJLA.

“On Thursday we came out and there were only three pumpkins,” Becky said.

“Pumpkins get smashed, pumpkins get stolen, of course,” Becky said. “I was really just mad because it was only his pumpkin [they stole].”

Reina said she doesn’t know if the thief saw the sign.