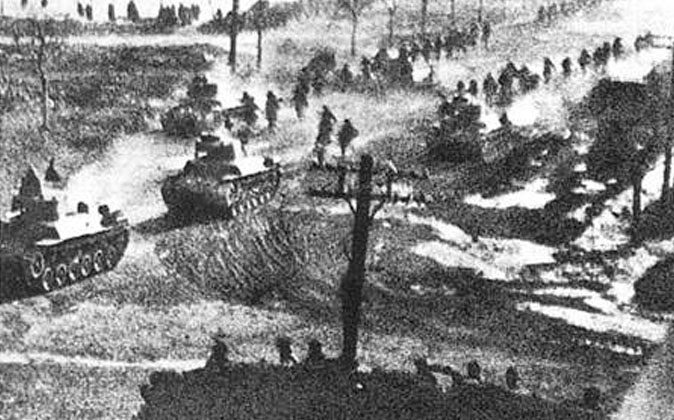 Communist troops in the Chinese civil war. Here, tanks of the People's Liberation Army participate in the Liaoshen Campaign, which brought the city of Changchun under siege in 1948. (Public Domain)
The Dead End of Communism

Siege of Changchun: Memories From a Communist Famine

In June 4, 2006, the Chinese state-run Xinwenhua Bao in Jilin Province reported that a large number of skeletons had been unearthed during excavation for an underground pipeline project in Luyuan District, one of six in the city of Changchun. The article reported that “with every stroke of the shovel, there appeared many yellowish skeletons. After four days of digging, at least several thousand had been discovered.”

The skeletons were from a dark corner of modern Chinese history. After World War II, Imperial Japan’s defeat meant only brief peace in China until 1946, when negotiations broke down and the nation, having thrown out a foreign invader, was at war with herself.

By 1948, the rapidly-growing forces of the Chinese Communist Party (CCP) had ground down the troops of the legal Nationalist government that were sent to secure northeast China. A series of defeats culminated in the Siege of Changchun, a period between May 23 and October 19, 1948 in which the communist military forces blocked all food shipments to the city. Nor did they allow civilians to flee the warzone, which resulted in the deaths of between 150,000 and 300,000 people, according to current estimates.

Changchun, a modern city built up by Japanese architects and Chinese raw labor, was encircled following the Nationalist armies’ defeats further to the southwest. The beginning of the end came when the rail hub at Siping fell to the communists on March 13, 1948, cutting off three Nationalist armies from their allies. Further communist victories closer to the Great Wall only sealed the city’s fate.

By the end of May, the CCP managed to shut down air transport to Changchun, bringing it into complete military and economic isolation. In June, communist officers Lin Biao, Luo Ronghuan, and Tan Zhenglian signed off on their “Changchun Siege Strategy,” which called for shutting down all transportation and business activities between Changchun and the outside world,  more specifically forbidding food, firewood, and other daily necessities. Communist leader Mao Zedong agreed with this proposal.

Because the food supply within the city could only last until the end of July, Chinese leader Chiang Kai-shek called Gen. Zheng Dongguo, the deputy commander of the nationalist’s northeast force, asking him to evacuate the people starting on August 1.

The communists foresaw this, and forbade people from leaving the city as refugees, as their presence in Changchun was part of the strategy.

Duan Kewen, an official in Jilin’s provincial government, recorded some conversations he heard from the time in his “Memoirs of Defeat in War.”

One sentinel said to a refugee: “you cannot go any further. If you do, we will have to shoot you.” In response, the refugee said, “We are all good citizens, how do you bear to starve us to death?” Then the sentinel said, “This is Chairman Mao’s order. We dare not disobey his order.”

According to Duan, those who tried to pass anyway were shot. At the same time, it was rumored that a communist commander had killed himself rather than witness the tragedy his forces were inflicting on fellow Chinese.

On September 9, Lin Biao, Luo Ronghuan, Liu Yalou, and Tan Zhenglian together reported to Mao: “The siege has achieved significant results, resulting in serious food shortage in the city…residents are eating tree leaves and grass to fill their stomach. And many have died because of hunger.” They mentioned that at the border some refugees kneeled before the sentinels pleading to be let go, while others complained that the sentinels just watched as they died. Some even handed over their babies and ran away. Others hung themselves in front of the sentry posts.

On October 20, the troops under the command of Gen. Zheng inside Changchun laid down arms. The CCP thus took over Changchun without firing a shot, as they proudly claimed—but at the cost of hundreds of thousands of lives. Central Daily News, a newspaper run by the Nationalists, wrote that according to the lowest estimate, at the Nationalist frontlines near Changchun, there were at least 150,000 corpses for the four months from the end of June to early October. Shang Chuandao, the former mayor of Changchun, wrote in his memoir that, during the siege, he reckoned at least 120,000 people had died because of hunger or illnesses.

Gen. Zheng recalled the scenes between July and the eventual surrender.

People who got out of Changchun alive recalled that they “ate grass and tree leaves, and drank from the rain collected from bowls when thirsty. After we drank everything from these bowls, we drank water collected from the human skulls, which were full of maggots.” “[CCP] kept on telling everyday how they would release anyone who had a gun. And people were actually released, once they turned over their guns. Everyday there were people being released, mostly rich people, who bought the guns—mostly handguns—in the city.”

Later, out of intense hunger, Cannibalism became a rampant phenomenon.

Duan Kewen, the official, wrote how he heard people were storming a shop for buying up cooked meat in the city. Duan said he took some people to check it out and found out that the meat that was being sold was actually human meat. Later, peddlers would lure children into their rooms, and then beat them to death. After chopping of their heads, they were skinned, chopped and cooked.

Duan also writes that because of shortage of goods, his wife and son also spent a few days at the empty area [between the city and the CCP’s front line]. They couldn’t escape and so they had to go back [to the city]. For days, the two of them had mental problems and cried all the time, with his son telling him that everywhere there were dead bodies whose bellies had ballooned after days of exposure to the sun.

Seeing the state of chronic hunger, cannibalism, and corpses lying everywhere on the street without proper burials, Zheng concluded,

“Changchun used to be a beautiful city, but now it was devastated with dead bodies everywhere—it was like a living hell in the world.”

Homare Endo, the child of Japanese colonists, was born in Changchun in 1941. And when she was 7 years old, she experienced the siege herself, during which her older and younger brothers died because of hunger. Later, she witnessed the madness of different political movements in the early years after CCP took power. In 1953, Endo and her family went back to Japan. In 1984, Endo published her book, “Qiazi [the name for the no-man’s land around Changchun]: No Escape from the Great Earth,” in Japan.

In August 2016, in an interview with Voice of America, Endo recalled what she had experienced back then, saying “Hunger forced my family to start eating distillation grain, and then we consumed wild vegetables, elm tree leafs and tree bark. There were dead bodies everywhere on the street and dogs eating the bodies.”

One passage in the book describes how Endo took the remaining 90 Japanese in Changchun to arrive in the “qiazi” zone, which was cordoned off by double layers of barbed wire. Because the area was littered with rotten and dried corpses, they tried to find a clean space to sleep. However when they woke up, they discovered they were actually sleeping on top of dead bodies, and everywhere around them were dead bodies and refugees.

Endo’s work can’t be published in China. Nearly every publisher turned down the opportunity to negotiate with Endo for publication because of the same reason—the matter was overly sensitive. The book was translated into Chinese and published in Taiwan in 2014. In August 2016, the book was published in English with the title “Japanese Girl at the Siege of Changchun.”

In an interview with VOA, Endo said, “I am indebted to China for raising me up. And as I bear the pain that I cannot describe, I want to spread the seed of truth to build a momentum for qia-zhi, to help the souls of those lost their lives. Chinese people have the right to know the truth about that part of history and learn their lesson from it.”

In 1989, retired Chinese colonel Zhang Zhenglong published the book “White Snow, Red Blood” describing the siege of Changchun. The book details how people were drafted forcibly and a lot of people died from hunger. Upon publication, the book created quite a stir and was sold for over 100,000 copies. Soon after, however, the book was banned [in China] for the reasons that it praised Nationalist leader Chiang Kai-shek and it had an inaccurate account of Gen. Lin Biao, who is officially considered a traitor to the Party. As a result, Ma Chengyi, the editor of the book was detained for 23 days and Col. Zhang was held for a month. In 2002, the book was published in Hong Kong.

The book “Mao: The Unknown Story” by Jung Chang and Jon Halliday cited comments by Su Yu, a CCP senior general, details how starving civilians to death was a tactic used to force the Nationalists in Changchun to surrender, and that such a “Changchun model” was later replicated in “quite a few cities.”

Later after the CCP took power, it enacted self-serving economic and social policies that caused the Chinese Great Famine, the most deadly in human history.

In his latest book “Changchun Hunger Siege,” Du Bin wrote about Wang Junru, a 76 year-old veteran from Changchun, who was one of the 100,000 soldiers that surrounded Changchun, said he regretted that he had followed the CCP in killing hundreds of thousands of refugees. As for why the CCP had to starve those people to death, Wang told New York Times that, ‘The order we got was the [refugees] were our enemies. So they had to die.'”

With reporting by Frank Fang.