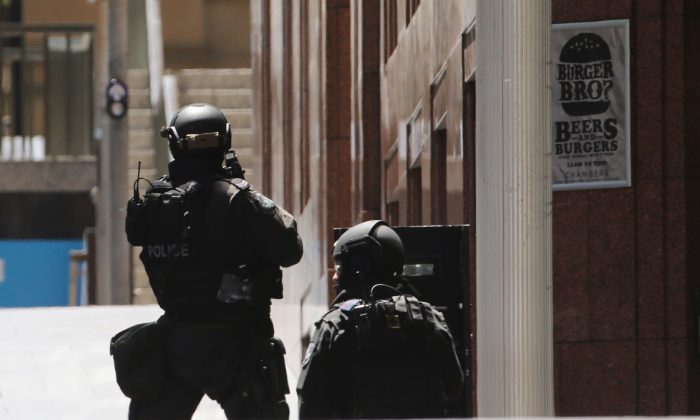 Police stand at the ready close to a cafe under siege in Martin Place in the central business district of Sydney, Australia, Monday, Dec. 15, 2014. (AP Photo/Rob Griffith)
Asia & Pacific

SYDNEY—The central business district of Sydney was under lock-down Dec 15 after hostages were taken in an inner city café.

At least 3 hostages were visible with their hands against the window of the Lindt Chocolat Café in Martin Place from around 10am, according to television network Channel Seven. Staff members of Channel 7 watched the incident from their office opposite the café.

The network reported that a black flag with white Arabic writing was clearly visible behind the hostages. Although it was first thought to be an ISIS flag, the flag depicts only the words of Islam: “There is no God but Allah and Mohammad is the messenger of God.”

Channel 7 producer Patrick Byrne said staff at the network watched in horror as the situation unfolded.

“We raced to the window and saw the shocking and chilling sight of people putting their hands up against the panes of glass at the cafe,” he told ABC news. “This was just extraordinary.”

“Then, as we were looking wondering what was going on, it seemed to be like an armed hold-up, more police arrived at Martin Place.

“The area was cleared. People were kept back.

“It was then that gasps went through the newsroom as [a] flag was put up against one of the window panes.”

While it is unclear how many people were being held, it was estimated there were at least 10 staff and up to 30 customers in the cafe as of the morning, according to Lindt Chief Executive Steve Loane.

Dozens of police and emergency cars descended on the city and hundreds of heavily armed police are roaming the streets, checking cars and buildings.

NSW Police as of the afternoon had not yet confirmed it was a terrorist act, describing the situation as an “armed incident”.

Martin Place, the hub of central Sydney, was partially evacuated, with a block between Elizabeth to Philip Street cordoned off and many buildings around the area in lock-down. The Sydney Opera House, a five minute walk from Martin Place, was also evacuated.

Traffic has been diverted, train and bus services to the area cut and air space above cleared.

“This is obviously a deeply concerning incident but all Australians should be reassured that our law enforcement and security agencies are well trained and equipped and are responding in a thorough and professional manner.”

Patrick Sinclair, who works with a corporate communications company in Australia Square, just down the road from Martin Place, said the city was deserted. “It’s very eerie,” he told Epoch Times.

Restaurants and cafes in the CBD including Australia Square were instructed to close and security was ramped up, with swipe cards required for entry to major buildings.

Like many city workers, Sinclair was on his way home after his company chose to shut down for the day.

“We have been glued to live feed and websites since we heard about it,” he said. “There was not much work being done.” Mr Sinclair says the events of the morning were chilling.

“It could have been any of us in the café,” he said. “It brings terrorism home. It is in our backyard.”