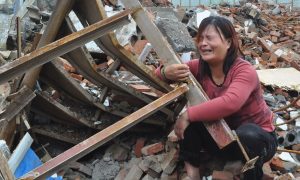 In China, Couple Held in Cemetery While Home Demolished
0 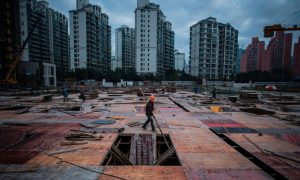 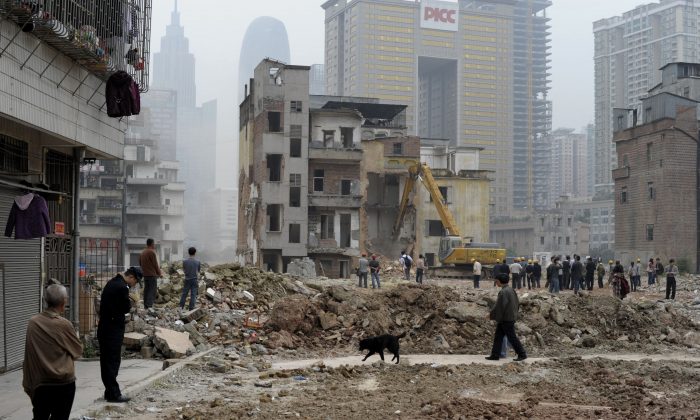 A real estate business report published by Chinese social media platform Weibo on Aug. 9 revealed that the poorest city in Sichuan Province is struggling with completing many unfinished projects, leading to the waste of thousands of acres of fertile farmland and loss of billions of funds.

Bazhong in Sichuan is considered a fourth-tier city. A local developer said the city has a low-income population and suffers from underdevelopment, according to the report.

One of the major projects is Panxing Logistics Industrial Park that was initiated in 2012. The project received a total investment of 15 billion yuan (over $2.1 billion). The local government requisitioned land in 2012, started construction in 2013, but suspended the construction in 2016.

A local resident complained that the project took over fertile land. Some of the completed units suffer from sluggish business and chaotic management. The existing three-story building is basically vacant on the second floor and above.

The Andersen Fairy Tale Theme Park is another abandoned project in Bazhong. A resident said the local government took over the land of three villages, and demolished farms and homes in 2013. Over 500 locals lost their homes and they were supposed to receive new housing as compensation. However, the project was halted before the foundation of the residential building was laid. Now the site is covered with weeds.

The developer of the Andersen Fairy Tale Theme Park is Hongxi Culture Company, founded by businessman Shi Yizhong in 2016. There were four other companies affiliated with Shi and were involved in the development of the theme park. However, these companies did not have a good track record and their business operations were recently suspended, according to a report published by Chinese web portal Sina on Aug. 10. The residents criticized the local authorities and questioned how they attracted investment into the city, the report said.

The Bazhong district government released a press statement in response to the media coverage that criticized the city’s unfinished projects. The statement said the projects were introduced in 2012 to develop the region in accordance with the 13th Five-Year Plan for economic development, and it was achieved by “combining the region’s own geographic advantages and the national policies” in order to “attract investment for logistics, tourism and other industries.” The statement also mentioned that in 2018, a warning was issued to the public about the “bad credit” of the developers, and the authorities involved in the poor management of the construction projects were under disciplinary action.

On Dec. 11, 2019, local authorities in Dushan, Guizhou Province, were part of the development of an “image project” that began in 2016.

Dushan is known as one of the nation’s poverty-stricken counties, and this was not the first time the county engaged in an image project.

On Aug. 7, 2019, Pan Zhili, the former secretary of Dushan county party committee, was sacked. China’s Central Commission for Discipline Inspection (CCDI) reported that Pan borrowed nearly 200 million yuan to build image projects for political gain, such as “the world’s first water tower” and “the world’s highest glazed pottery building.” When Pan was removed from his post, the county had reportedly accumulated a debt of 40 billion yuan ($5.7 billion).

The so-called image project is widespread in China. Officials manipulate the laws to develop local infrastructure for their own financial and political gain, and without concern for the betterment of the local people and development of their community. “Public construction projects, in particular, face high corruption risk as the public construction sector has been consecutively deemed as the most corrupt one,” according to a report by ResearchGate.

On Dec. 20, 2019, the Chinese language edition of The Epoch Times reported that Nanyang city of Henan Province was known as the “Capital of Unfinished Buildings.” There are still more than 120 unfinished projects that have been put on hold due to lack of funds.

According to the report, the local government in Nanyang still uses land finance as its main income, selling land at high prices, which has led to a continuous increase in land prices and even the emergence of new “land kings.” However, in the first 11 months of 2019, land sales in the city fell by 20 percent, compared to the same period in 2018.

Some analysts said that in this case, developers will definitely pass on the cost to the housing market, and buyers will eventually pay for it. In other words, the over-reliance on land finances pushes up housing prices, but the real economy is weak and land use efficiency is low. As a consequence, the real estate bubble could burst.

Unfinished projects are scattered all over China. Apartment complexes, industrial parks, commercial office buildings, image projects, etc., were abandoned due to debt and lack of funds. Some projects been abandoned for more than a decade, leaving unfinished construction sites in ruin.