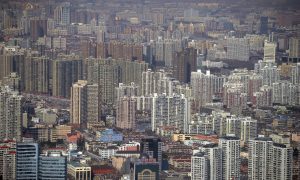 A reporter was arrested in China last week when he helped local residents prevent a bulldozer driver, sent by local developers, who was trying to demolish their houses.

The reporter, Chen Baocheng, works for Caixin Media, a major business publication in the mainland. Several other residents of his hometown of Pingdu city, Sichuan, reported the bulldozer driver to the police for illegally demolishing houses, according to Radio Free Asia.

When police ignored their report, Chen and his fellow villagers took matters into their own hands. They captured the bulldozer driver on Friday and detained him for more than 25 hours, according to Chinanews.com, a state-run media outlet.

Police quickly showed up at that point and arrested Chen and seven others. Chen’s employer, Caixin, found out about his detention through the Internet on Saturday, they said in a statement.

Caixin added that they tried to contact the Pingdu police that night and ask for more details, but the policeman who answered the phone refused to give any information and said their fax machine was broken.

“Caixin is closely following the detention of Chen,” Caixin said in the statement. “We hope that the authorities in Pingdu can disclose information in a timely manner and handle the case with justice and transparency.”

Chen’s lawyers are now trying to get him bailed out of jail.

“I don’t think there is a crime to answer here … so I think they should allow bail under the provisions on bail in the Criminal Procedure Law,” Li Huiqing, one of his lawyers, told Radio Free Asia.

It’s a common occurrence in China for villagers to protest government land grabs.

“This is a journalist who understands the law,” Pu Zhiqiang, another of Chen’s lawyers, told Radio Free Asia. “People were protecting their own homes from illegal demolition, and the government did nothing when they called the police.”

“There has never been a dynasty like [the ruling Chinese Communist Party], which grabs land from ordinary people on a national level, and pulls down their houses,” Pu said. “Nor one in which the government is so closely bound up with evil developers, to the extent where they become enforcement mobs for their interests.”