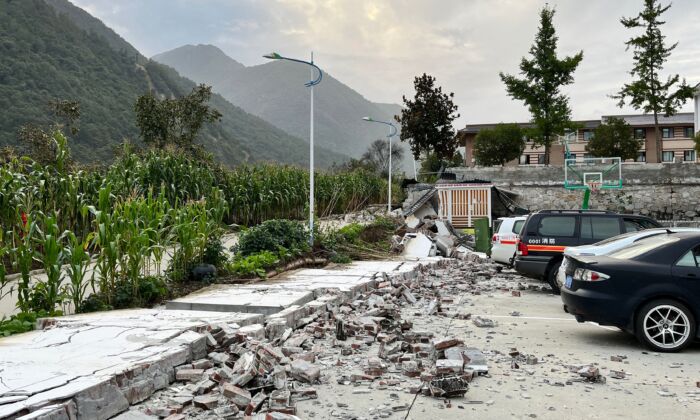 The aftermath of a 6.6-magnitude earthquake in Hailuogou in China's southwestern Sichuan Province on Sept. 5, 2022. (STR/AFP via Getty Images)
Social Issues

A 6.8 magnitude quake struck China’s southwestern Sichuan Province on Sept. 5 with casualties still being evaluated so far 86 deaths and 35 people missing, as of Sept. 8.

The epicenter is in Hailuogou Glacier Forest Park, which is a mountainous national reserve in Luding county, near Mount Gongga.

The quake shook the provincial capital Chengdu, 125 miles northeast of the epicenter. No casualties have been reported in the city.

Locals of Luding told the Chinese language edition of The Epoch Times that their homes have been badly hit by the earthquake. Houses have cracked or collapsed. Roads are blocked by rocks falling down the mountainside. There are power blackouts, and communication is on and off from time to time due to signal disruptions. They very much need rescue and help from the outside.

However, local authorities at Garze prefecture, which oversees Luding county, issued a notice on Monday, imposing more stringent lockdown measures immediately after the quake, confining victims of the earthquake to their homes and rejecting civilian rescue teams.

According to an online notice allegedly issued by Garze prefecture’s pandemic and emergency response command, people and vehicles are only allowed to exit; civilian rescue teams are not accepted; rescue teams approved by the local authorities must have negative PCR test results within 24 hours; residents and rescue teams must take PCR tests on a daily basis.

The actual casualties may be much higher than the official data, as the Chinese Communist Party (CCP) habitually alters data and information about disasters.

Moxi town is situated at the entry of the Hailuogou glacier scenic area.

“Many houses in the town have collapsed, and many people are killed in the quake. Very sad,” Luo Na (pseudonym), a resident of Hailuogou, told the Chinese language edition of The Epoch Times on Sept. 5.

She added that many people were still buried in the ruins, but rescue was slow due to the upgraded lockdown measures and poor road conditions.

“The local government only allows officially approved rescue teams to come in, and no civilian rescue personnel are allowed in,” Luo said.

According to Luo, the casualties in the neighboring Shimian county were more severe, but she didn’t give an exact number of injuries and deaths.

She said that people were unprepared because the government did not issue any warning before the earthquake. There has been no internet service since the quake, and people stuck in the epicenter have no idea what is going on.

A netizen asked for help online, saying that his sister was traveling in Hailuogou on Sept. 5 and that he lost contact with her on Sept. 6, hoping someone could provide him with information about his sister.

‘The Mountain Seems to Split Apart’

Luding county resident Lin Lei (pseudonym) told the publication on Sept. 6 that two hotels in Hailuogou scenic area fell down, with people buried in the ruins.

Luding county is roughly 50 miles to the northeast of Hailuogou. Lin said that residents heard an extremely loud noise when the earthquake occurred and that everyone immediately ran to an outdoor open space.

“We are more alert after the Wenchuan earthquake,” Lin Lei said.

Lin said that the weather was abnormal before the recent earthquake. “It normally snows after October. But this year, it had already snowed. It snowed and rained, and then it became sunny again, which is rather rare,” Lin said.

“I saw the collapse of the mountain with my own eyes. I saw the mountain cracking and the smoke rolling around, and it was quite scary. The mountain seemed about to split apart,” Lin said that she still feels a lingering fear.

She said that rescue was very slow due to the lockdown measures.

“If not for the pandemic control, there would have been many rescue personnel and vehicles from other places,” she said. “But now the rescue is slow, and the golden period [of 72 hours] is likely to be missed,” she said.

As the epicenter is a mountainous area, the quake has caused landslides, swallowing villages down the slopes. Lin said that there were people buried under the mud and rock. With the golden period lapsing, more people would have died, she added.

She felt that Chinese people are having a very difficult time this year.

“Now on top of the pandemic, we have this earthquake. Shops are all closed; we don’t know when our life will be back to normal,” Lin said. “But anyhow, it is good as long as we stay alive.”

Current affairs commentator Tang Jingyuan said that the communist regime’s refusal to have civilian rescue reveals that the regime doesn’t care about the life of the Chinese people at all.

When speaking with the publication on Sept. 6, Tang said that the regime’s PCR test requirement of official rescue personnel is a political requirement, an effort to toe the party line of zero-COVID policies.

“In China, it takes at least four to six hours, sometimes more than twelve hours, before PCR test results come out,” Tang said, “The requirement is a waste of time and waste of life as the rescue golden period is only 72 hours.”

Tang said that the local government doesn’t allow civilian rescue teams to go into the epicenter because the authorities don’t want people to know the true situation in the area.

In 2008, after the Wenchuan earthquake, “civilian rescue personnel exposed inferior building quality of schools, or ‘tofu waste construction,’” which led to the collapse of school buildings, causing the deaths of many young students Tang said. “In fact, it is very likely that the Luding government’s refusing civilian rescue is an effort to prevent possible exposure of similar scandals by civilian rescuers.”

“I don’t know how many people who would have had a chance to be saved have lost their lives because of the regime’s covering up of facts,” Tang added.