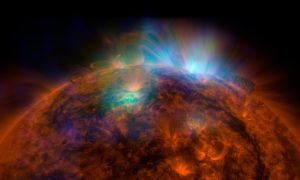 Sibling suns—made famous 40 years ago when Luke Skywalker gazes toward a double sunset in the first “Star Wars” movie—and the planets around them may be more common than previously believed.

Astronomers could discover a plethora of planets around binary star systems (stars that rotate around each other) by measuring with high precision how stars move around each other, looking for disturbances exerted by possible exoplanets, a new study suggests.

The findings are published in the Proceedings of the National Academy Sciences.

What once was fictional as Skywalker saw the double suns from his home planet “Tatooine,” is now astronomical reality, researchers said.

Normal binary suns orbit each other every 8 to 100 days, and the Kepler telescope can easily detect those exoplanets (planets outside of our own solar system) as the planets move across each sun.

The trouble starts in compact binary sun systems—where sibling suns move closer together—making it difficult for the most advanced telescopes to find them. Essentially, for Kepler and other telescopes, the planetary orbital plane of these double suns and their accompanying planets might be out of whack—or misaligned—rendering them invisible to us.

Suns in the close binary system likely were once standard systems that have lost energy and shrunk, bringing the suns closer together, Muñoz said. As the sibling sun’s distance decreases, the orbits of that system’s planets become misaligned, rendering it impossible for the Kepler telescope to detect planets—which no longer cross in the front of the suns.

“Since this type of ‘compact’ binary is very common, it had been very puzzling that no planets had been detected,” Muñoz said.

This research was funded by the National Science Foundation and by NASA.