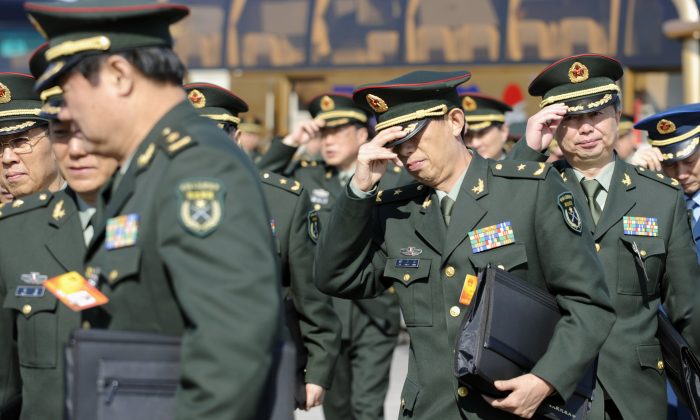 The Beijing Garrison of the People’s Liberation Army has one of the most important and sensitive jobs in the armed forces: It guards other PLA facilities, provides logistical support to the secretive Central Guard Bureau, and assists in the protection of the Party’s top leadership.

China’s Communist Party has long stuck to the Maoist dictum that political power grows out of the barrel of a gun. Thus, alongside the garrison in political importance there is the Beijing Military Region, which protects the capital, and the Central Guards Bureau, which personally guards the top leaders.

It thus becomes significant when there are changes in the leadership of these three organs, such as the appointment of a new deputy commander and political commissar in the case of the garrison, and a raft of personnel changes in the military region, including the appointment of Xi Jinping loyalists, the demotion of officials close to purged members of the military, and new leaders.

All the action suggests that Xi Jinping is enhancing his control of these sensitive posts and protecting his flank as his anti-corruption campaign extends deep into the military and the Communist Party itself.

The instinctive secrecy of the Communist Party often means that new appointments to these positions go unannounced. Instead, officials simply show up in public wearing the new titles, and then observers know that a shuffle has taken place.

Such was the case with Wu Aimin, who attended a military conference on March 18 in Beijing as the deputy commander of the Beijing Garrison. (Previously, he was known as a commander in the third division of the garrison.)

Then there was Jiang Yong, who also appeared at a military conference on Jan. 8 with the new title as political commissar of the garrison, according to The Paper, a semi-official publication based in Shanghai. Jiang previously served in the Nanjing Military Region, as did Party leader Xi Jinping, and has thus come to be termed Xi’s loyalist.

Much of the focus of Xi Jinping’s Party rectification campaign has been on clearing out the networks of control and influence that were established and operated by former Party leader Jiang Zemin.

The Beijing Military Region, which is charged with defending the capital and boasts around 300,000 troops, has also seen a range of high-level changes in personnel.

First Liu Zhigang, formerly a deputy commander of the region, was removed and made deputy of the less-sensitive Jinan Military Region. Notably, Liu was once a secretary for former vice chairman of the Central Military Commission Guo Boxiong, who is firmly in the crosshairs of Party investigators. Guo, like powerful former or current officials who have already been purged, is believed to be a crony of Jiang Zemin, the leader of the Communist Party from 1989 to 2002.

Liu’s comrade, Qi Changming, formerly the deputy chief of staff of the Beijing MR, was put out to pasture in the Lanzhou MR, in southwest China. Qi was formerly the secretary of Xu Caihou, another purged military heavyweight who acted as Jiang Zemin’s eyes, ears, and hands in the forces long after Jiang’s departure, according to recent revelations in the mainland press.

Much of the focus of Xi Jinping’s Party rectification campaign has been on clearing out the networks of control and influence that were established and operated by Jiang Zemin. Most notably this has included Zhou Yongkang, who controlled the Party’s entire security apparatus, which boasts a budget larger than the military.

Most recently, media instruments inside and outside of China, presumed to take cues and receive information from Party insiders and propaganda authorities, have run reports saying that Zhou Yongkang and Bo Xilai, a felled Politburo member, engaged in “non-organizational political activities.” This has widely been interpreted to mean that the two formed a seditious faction and sought to derail incoming leader Xi Jinping.

Important appointments have also been made at the Central Guards Bureau, which protects the Communist Party elite.

Wang Shaojun, said to have once been Xi Jinping’s personal bodyguard, was moved from deputy secretary of the bureau to head of it, according to the Hong Kong-based South China Morning Post on March 13. Two other officials in the bureau were shifted, effectively demotions, to the Beijing Military Region and to a PLA engineering university, according to other reports.

Beijing’s public security apparatus has also seen a change: Wang Xiaohong, a former subordinate of Xi Jinping from his tenure in Fujian Province in the 1990s, where he was Party secretary, has been made head of the Public Security Bureau in the capital.

The announcement was carried in major mainland press reports. These included a glowing appraisal of Wang’s service history in Caixin, a news magazine run by Hu Shuli, long believed to be personal friends of both Xi Jinping and his right-hand-man, anti-corruption czar Wang Qishan.