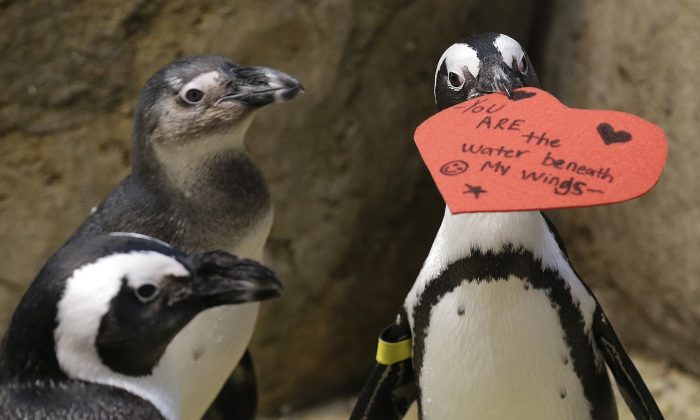 An African penguin bites into a heart shaped valentine at the California Academy of Sciences in San Francisco on Feb. 13, 2017. The valentines will be used as nesting material. (AP Photo/Jeff Chiu)
US

Showing Some Love: Penguins Get Valentine’s Hearts for Nests

SAN FRANCISCO—Penguins at a California aquarium got more than their daily helping of fish to celebrate Valentine’s Day.

Biologist Piper Dwight handed out red hearts to 14 African penguins at the California Academy of Sciences during a feeding Monday.

Visitors took photos of the animals grabbing the hearts in their beaks and waddling around their enclosure. Some even fought over the thick felt hearts that can withstand water and are adorned with messages such as “You are the water beneath my wings.”

The penguins will use them to decorate their nests. Vikki McCloskey, assistant curator of the museum’s Steinhart Aquarium, says it will encourage breeding and bonding by penguin couples.

She says male penguins in the wild attract a mate by making nests “look pretty nice.”