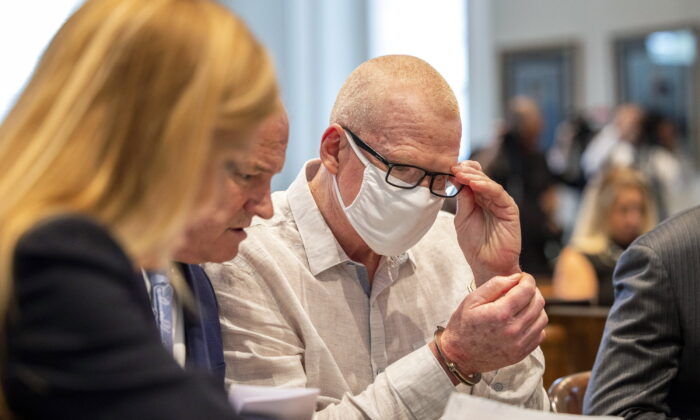 Alex Murdaugh appears for a hearing at the Colleton County Courthouse in Walterboro, S.C., on July 20, 2022. (Gavin McIntyre/The Post And Courier via AP)
Crime and Incidents

COLUMBIA, S.C.—A showdown between defense attorneys for disbarred lawyer Alex Murdaugh who say prosecutors are unfairly withholding evidence and prosecutors who want the defense to agree to secrecy rules first is heading for a courtroom next week.

In their latest court filing, defense lawyers said the secrecy rules as Murdaugh awaits a murder trial in the shooting deaths of his wife and younger son are hypocritical because prosecutors are leaking evidence to media outlets, including a video the leaker said was taken not long before the killings.

A hearing about the matter is scheduled for Monday at the Colleton County courthouse, where defense attorneys want the murder trial to take place in January.

The cellphone video from Murdaugh’s son included Murdaugh talking to his wife outside the family’s Colleton County home where the killings happened, said defense lawyers, who added that they haven’t been given the video, but it was shown to Murdaugh’s family by state agents.

The leaked media reports did not include that the conversation was friendly and about dogs, the defense said. Defense lawyer Dick Harpootlian said the state contends that Murdaugh killed his wife and son “for no apparent reason” within minutes of the light-hearted conversation.

“Perhaps this crucial information was intentionally omitted from the media leak to portray Alex Murdaugh in the worst possible light,” Harpootlian wrote in his motion.

When the accusations first came up last week, Wilson said no one in his office has leaked anything and he spoke to leaders at the State Law Enforcement Division who also denied releasing information improperly. Prosecutors have not responded to the latest motion from the defense.

Court papers did not identify the media outlets.

Murdaugh, 54, remains in jail awaiting his trial. Investigators contend he killed his wife, Maggie, 52, with a rifle and his son Paul, 22, with a shotgun in June 2021. Prosecutors have not revealed what evidence linked Murdaugh to the killings and nothing about a possible motive.

Murdaugh’s lawyers have said he adamantly denies the killings.

Defense lawyers said prosecutors missed an Aug. 15 deadline under long-standing legal rules to share all the evidence they have gathered so far. Prosecutors said they don’t want to turn that information over until the defense agrees to a protective order limiting who they can show the evidence to and how it handles documents, photos and recordings.

Authorities said they want to protect autopsy or crime scene photos from becoming public and other evidence being revealed before the trial.

But in their motion, the defense said prosecutors are self-serving with that request, stacking the deck so Murdaugh can’t get a fair, speedy trial to clear his name. It took investigators 13 months to charge Murdaugh, and his lawyers surmise there are thousands of pages of interviews, GPS and phone records, surveillance videos, autopsy results and other evidence to review.

“The State continues to use the material, which should have been disclosed to the defense already, in witness interviews and to otherwise prepare its case for trial, while Alex’s counsel are reduced to motion practice begging to see the evidence to be used against him,” Harpootlian wrote.

Murdaugh’s legal woes extend far from a murder trial. In all, Murdaugh faces about 90 charges. Most of them are financial crimes, with prosecutors saying he stole at least $8.5 million from settlements he got for about a dozen poorer clients in injury or wrongful death cases. He was most recently indicted on charges he stole from the family’s law firm and his own brother, who is an attorney there.

Authorities also have said he also laundered money through a drug ring and by writing 437 checks worth $2.4 million to associates and others to avoid bank reporting requirements. Murdaugh also tried to get a man to kill him so his surviving son could collect a $10 million life insurance policy, investigators said.

It’s a stunning fall for a man whose family dominated the legal scene in tiny, neighboring Hampton County for nearly a century. His father, grandfather and great-grandfather were the area’s elected prosecutors for 87 years, while his family also built one of the most prominent small-town legal firms in South Carolina over the past century.