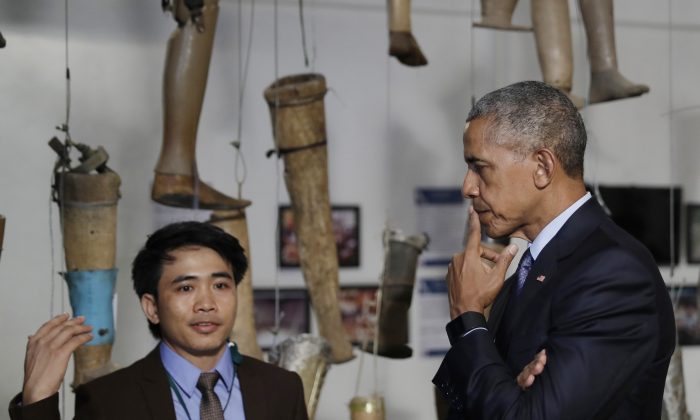 Showcasing Lao Culture, Obama Pushes Back on US Isolationism

LUANG PRABANG, Laos—President Barack Obama ventured Wednesday to a remote mountain town in Laos to tour a centuries-old Buddhist temple, gently chiding Americans to resist turning a blind eye to the world outside their borders.

Obama used a visit to the mountainous northern city of Luang Prabang to push back against an America-centric world view promulgated by Republican Donald Trump. Questioned by young Southeast Asians, Obama said the U.S. could be a great force for good but has been constrained by the tendency to look inward.

“If you are the United States, sometimes you can feel lazy and think, you know, ‘we’re so big, we don’t really have to know anything about other people,'” Obama said. “That’s part of what I’m trying to change.”

Though he didn’t mention Trump by name, Obama appeared to counter the isolationist approach epitomized by the Republican presidential nominee’s “America first” rallying cry. An ardent opponent of Obama’s efforts to boost global trade, Trump has questioned the U.S. alliance with NATO and vowed to build a wall between the U.S. and Mexico.

So when an Indonesian woman asked Obama about American multiculturalism and the edict “e pluribus unum” — out of many, one — Obama seized the chance to explain that when times are tough and people feel stressed “they turn on others who don’t look like them.” He said that’s why it’s critical for the U.S. to promote principles that rise above any individual religion, nationality or race.

“Not everybody in America agrees with me on this, by the way,” Obama said. After a moment’s hesitation, he added: “I’ll leave it at that.”

Throughout his visit to Laos, Obama has lamented that most Americans know little about the country or the devastating secret nine-year war the U.S. waged here half a century ago. He sought to use his presence and the spotlight that follows him to bring attention to an unfamiliar corner of the world.

In Luang Prabang, he showcased a rich cultural and religious heritage. A UNESCO World Heritage List site along the Mekong River, the city was a hub for Buddhist faith during the Lan Xang kingdom starting in the 14th century.

Obama’s first stop was Wat Xieng Thong, a 16th century complex of ornate gold buildings known as the “Temple of the Golden City.” He removed his shoes before entering the carriage house, where he examined a line of golden statues.

Greeting the temple monks, Obama posed for a group photo with about 20 boys in bright orange robes after being informed they weren’t supposed to shake hands. He bought gifts for daughters Sasha and Malia at an open-air shop and sipped from a coconut.

On this first visit by a sitting American president, Obama has placed a particular emphasis on trying to heal wounds inflicted by the war the U.S. waged here as part of the Vietnam War.

Obama paid tribute to survivors maimed by some of the 80 million unexploded bombs America dropped on Laos during the war. Vowing the U.S. will do more to help finally remove them, he touted his administration’s move to double spending on ordnance cleanup to roughly $90 million over three years.

“For the last four decades, Laotians have continued to live under the shadow of war,” Obama said as he toured a rehabilitation center in the capital of Vientiane that cares for bomb survivors. “The war did not end when the bombs stopped falling.”

Some 20,000 people have been killed or wounded since the war ended, Obama said after viewing displays of small rusted grenades and photos of a child missing a foot. He insisted those were “not just statistics,” but reminders of the heavy toll inflicted by war.

“I’m inspired by you,” Obama told Thoummy Silamphan, a survivor who uses a prosthetic after losing a hand to one of the bombs.

The president did not come to Laos to apologize. Instead, he said he hoped the strengthened partnership on bomb clearing could mark a “decisive step forward” between the U.S. and this landlocked communist nation.

The visit also served as a capstone to his effort to bolster relations with Southeast Asian countries long overlooked by the United States. The outreach is a core element of Obama’s attempt to shift U.S. diplomatic and military resources away from the Middle East and to Asia to counter China in the region and ensure a U.S. foothold in growing markets.