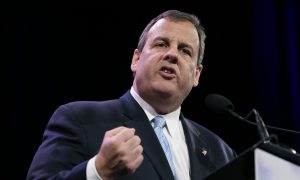 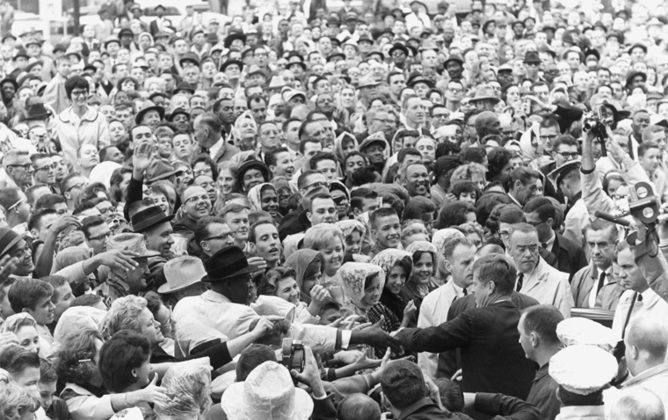 Hoards of Jack Kennedy fans would greet the candidate during his 1960 campaign for President. (Wikimedia Commons)
Life & Tradition

The next presidential race has begun, and over the next year and a half, Americans will watch extravagant political productions unfold. Those looking to succeed President Obama will likely build on the political tradition of “showbiz politics” – using entertainment to inspire, engage and communicate with the public. As a result, many voters will get to know candidates through popular culture, whether it’s via late night television shows or music videos.

But songs, in particular, can set the tone and reflect the message of modern campaigns. It can give candidates an opportunity to assert their celebrity status and even to challenge party traditions. We’ve already seen Rand Paul turn to heavy metal music to reinforce his campaign theme of Republican regeneration and rejuvenation.

And via Twitter, Katy Perry has already volunteered her songwriting services for Hillary Clinton, who in turn responded with praise for the singer’s hit song about female empowerment, Roar.

.@katyperry Well that’s not a Hard Choice. You already did! Keep letting us hear you Roar.

The campaign song has always been an important political tool, but it’s one that has been repurposed through the years. Its history reflects a broader shift in American politics: from a system controlled by parties, urban machines and patronage, to one dominated by political consultants and advertisers who seek to craft presidential personalities as popular celebrities.

Campaign music has a deep and rich history in American elections. As the party system expanded and formalized during the 19th century, so too did the place of music in campaigns.

Back then, state party leaders would adjust lyrics and melodies in an attempt to appeal to regional musical tastes. Songs were a way for local party workers to communicate and promote the party’s platform and its candidates. In fact, presidential candidates did not actively stump for their own candidacy. Though involved behind the scenes in party politics, they existed as party figureheads to the public – not as independent personalities. Voters would support the party, often selecting an entire party slate instead of picking and choosing individual candidates.

By the 20th century, however, presidential contenders began to take to the campaign trail themselves. Yes, they continued to rely on party’s machinery to turn out votes, but they also began using their oratory and public relations skills to make personal appeals to constituents.

Franklin D Roosevelt used popular culture both to promote and build a New Deal party coalition, with the dynamic Roosevelt positioned as the keystone.

Nonetheless, these celebrity appeals stood at the periphery of Roosevelt’s campaign: they merely supplemented a New Deal machinery that had already delivered concrete economic opportunities to voters across the country.

A Star Is Born

A decisive shift, however, can be pinpointed to the 1960 Wisconsin primary, when Minnesota Senator Hubert Humphrey and Massachusetts Senator John F. Kennedy faced off.

It was a study of contrasts – in message, in personality and in political style. While Hubert Humphrey relied on the Democratic tradition of linking entertainment with party issues, JFK used entertainment to bypass the party power structure.

Following tradition, Humphrey courted the Democratic Party’s loyal base: labor unions and farmers. He traveled the state with the educational director of the United Rubber Workers, who strummed his guitar and sang folk music to appeal to the Midwestern state’s rural workers. After his campaign speeches, Humphrey engaged in intense debate with voters over particular issues, attempting to win over the crowd with his specific mastery of the details of farm prices and labor-union politics.

John F Kennedy, on the other hand, hoped to win the Democratic nomination by running a campaign squarely centered on a carefully crafted media persona. Using a personalized version of Frank Sinatra’s hit song High Hopes and other publicity tricks from Hollywood, he attempted to build a voting bloc of “Jack Kennedy fans.”

Throngs of people eagerly awaited the arrival of Kennedy’s entourage, who rolled into town with the candidate in a station wagon blasting the tune High Hopes from two large speakers attached to the roof.

Sinatra’s song not only helped Kennedy infuse his campaign with vigor and energy, but it also created a common language for voters across the country to express support for his candidacy. Miners in West Virginia and Polish Americans in Milwaukee all welcomed Kennedy to overflowing halls by singing the popular song. If fans couldn’t attend these events, they could send a dollar to the Kennedy campaign and receive an autographed copy by Kennedy of the musical recording.

Sinatra’s lyrics created an emotional connection between Kennedy, the popular personality and voters – who may have been Democrats, Republicans or independents.

Diverging dramatically from the longstanding tradition of music in American electoral politics, Kennedy’s victory over Humphrey proved the effectiveness of a campaign rooted in celebrity appeal, especially on the primary trail.

It’s a legacy that shapes the use of popular music today.

Fleetwood Mac reunited to play Don’t Stop for Bill Clinton’s 1992 effort. With this song, Clinton used a song of the past to generate excitement about the future. Like Kennedy’s use of High Hopes, the Fleetwood Mac song emerged as part of Clinton’s successful effort to leverage a fun-loving, hip media persona into votes.

And from Ben Harper’s Better Way to Stevie Wonder’s Signed, Sealed, Delivered I’m Yours, Barack Obama translated the support of entertainers into a musical message on the campaign trail.

Entertainment has also helped Obama govern. Through using online platforms like Buzzfeed and cracking jokes on comedy shows like The Colbert Report, he’s been able to promote his immigration and health care policies.

So as presidential contenders start making the rounds, look for political productions designed to capture the emotions, interest and loyalty of primary voters – the candidates’ very own “fan bases,” which they hope will translate into voter blocs on Election Day.

Cultivating these resources will also prepare contenders to assume the role of entertainer-in-chief, now a mandatory job requirement for the presidency.

Kathryn Cramer Brownell is Assistant Professor of History at Purdue University. This article was originally published on The Conversation. Read the original article.