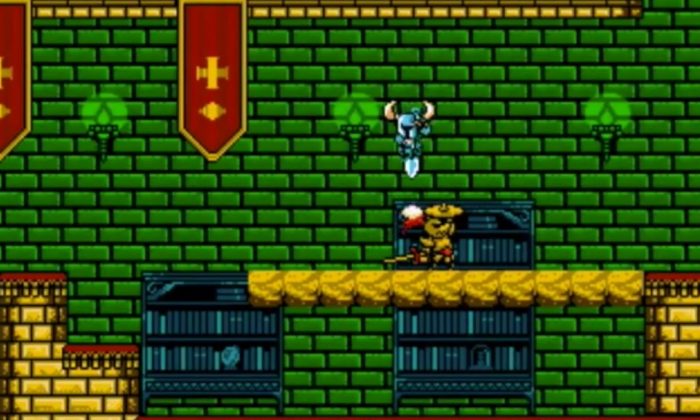 The Easter egg replaces a number of the nouns in Shovel Knight with the word butt, while the Shovel Knight himself becomes “Butt Butt.” The character Shield Knight becomes “Shield Butt.”

However, the Feats will not be available for the Shovel Knight when the Easter egg is activated.

There’s a few other cheat codes players can use. If one saves their game file as “SJPACXWH,” players start with the Flame Wand item along with unlimited magic. Saving the game with “XQGRITOH” will allow players to have a mint-colored Shovel Knight.

There’s a Google Doc file with more than 300+ codes, referenced in a Steam thread.

The game–available via Nintendo Wii U, 3DS, and PC–was funded via Kickstarter.

Overall, Shovel Knight has been praised for its inventive, old-school gameplay. Although some have said the game can be quite difficult at times.

Currently, the game isn’t available for the PS4, PS3, Xbox 360, or Xbox One. But according to Gamepur, Sony is working on getting the title to the PS4 and PS Vita.

Industry insider Tidux revealed the move by Sony a few days ago.

“Checked with an other guy, this is the biggest and craziest thing i ever heard, #Crazyfriday #PS4,” he said. “Sony is working full on getting Shovel Knight to PS4/PSVita …Yeah, Sony looking in to help out the small studio.”

Tidux didn’t leak any other details about the development.