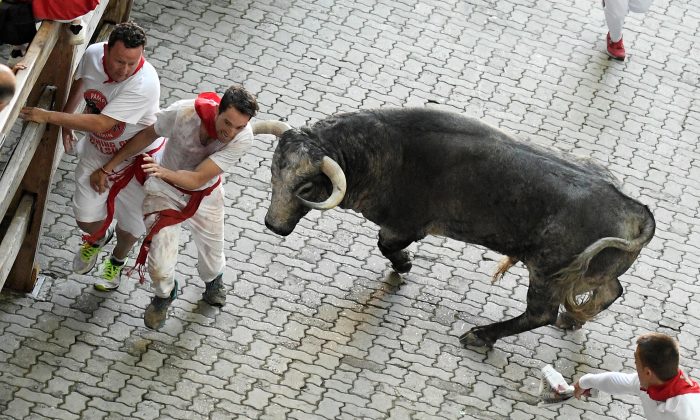 Participants run next to Cebada Gago fighting bull on the third day of the San Fermin bull run festival in Pamplona, northern Spain on July 9, 2018. Each day at 8am hundreds of people race with six bulls, charging along a winding, 848.6-metre (more than half a mile) course through narrow streets to the city's bull ring, where the animals are killed in a bullfight. (Jose Jordan/AFP/Getty Images)
Viewpoints

Should We Be Worried? Risk in Modern America: Part 1

We do many things astonishingly well as a modern society. Our communications technology rivals anything Gene Roddenberry contemplated when he dreamed up the “Star Trek” universe.

Advances in medicine have rendered scores of heretofore deadly diseases and conditions impotent, so long as the prospective victim has access to the best that modern diagnostic technology and the pharmacopeia can provide.

It’s an incredible time to be alive.

Yet, for all the joys and wonders inherent to living in a technologically advanced nation in the 21 century, there is at least one aspect of that incredible inheritance that threatens to destroy all the hard work of previous generations: the modern-day misapprehension, misrepresentation, and near-criminal sensationalism of the broad, overly encompassing concept we describe as “risk.”

It’s an odd, but undeniable, truism that the greater the level of security, the greater the degree of paranoia. In general, an emperor living in a fortress or palace surrounded by armed bodyguards is going to be far more worried about threats such as poisoning, murderous assaults, and other forms of attack than the ordinary, run-of-the-mill subject.

The safer that one actually is, the more minute the threats one feels obliged to fret about. A peasant camping in the woods in ancient times, for example, would spend far more time and energy worrying about and protecting himself from the very real and very deadly possibility of wild-animal attack, than the relatively remote threat of inadvertently consuming foodstuff that may increase his cholesterol.

Today, we worry about things that previous generations wouldn’t have cared a whit about. Many of us obsess over the slightest of threats. Our collective ability to soberly assess risk is deteriorating at an ever-increasing pace.

There are a lot of reasons why this so. Technological advances make for an increasingly complex world that is difficult for many to understand, and there is money to be made convincing people that they are at risk—both by businesses selling products that are designed to mitigate the risk and organizations whose fundraising is largely dependent on convincing donors that the risk is so dire that disaster is just around the corner.

The complex issue that we commonly describe as climate change presents an obvious example of the phenomenon, but hardly the only one. Risk avoidance, risk mitigation, and risk research are all big businesses. These concepts sell newspapers and get politicians elected. Many of the vastly inflated risks involve chemistry or the environment or both. Being an expert in both subject areas, both by education and by over 30 years’ worth of real-world experience, I find the trend to exaggerate these classes of risks especially vexing. Nor does our obsession with risk do our society much credit.

There is more than a little vanity in a nation where people feel the need to buy water filtration products when they have access to some of the cleanest tap water in the free world. It was not so long ago that Americans were rightly concerned about the spread of sometimes fatal diseases like cholera and dysentery associated with drinking biologically contaminated water. Today, we imagine ourselves in danger if a part per billion of lead somehow makes its way into the water and decide we are much safer if that concentration is lowered to a part per trillion instead.

Risk is rarely rationally understood by non-technical people, and even then, the technically trained easily can be deceived when straying too far away from their field of expertise. It never ceases to amaze me how many intelligent people subscribe to the discredited theory that vaccines cause autism, for example.

In this series of articles, I will provide my perspective on risk management, risk communication, and risk perception in the United States. It’s an interesting, multi-faceted story involving the decline—or least overt-politicization—of legacy journalism, politics, advertising, higher education, and, of course, the pursuit of profit. It’s also an important story, affecting your life and income in more ways than most realize.

I hope to convince you, dear reader, or rather hope you will be open to being convinced, that despite the narratives and tales so popular today, the greatest risks that the average American faces on a day-to-day basis are what they have always been: natural, not man-made.