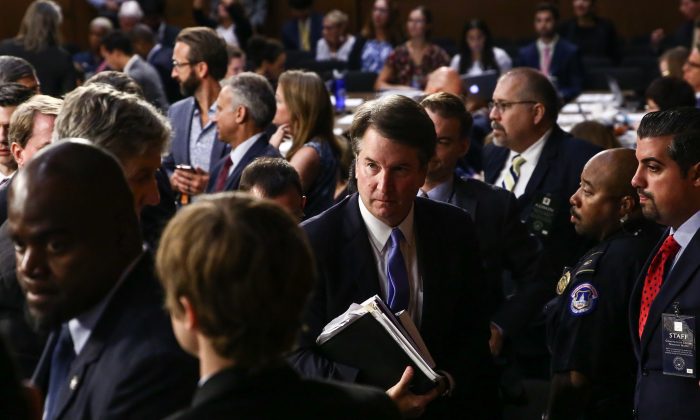 Judge Brett M. Kavanaugh testifies before the Senate Judiciary Committee during the third day of his confirmation hearing to serve as Associate Justice on the U.S. Supreme Court at the Capitol in Washington on Sept. 6, 2018. (Samira Bouaou/The Epoch Times)
Viewpoints

Should There Be a Cultural Statute of Limitations?

We are amid a series of scandals in the Virginia state government that center on yearbook photos taken nearly four decades ago and an admission of a similar transgression by another political leader that took place a few years before.

For the first time since 1989, the Oscars will not have a host, following an outcry about jokes told by a comedian a decade or so ago. A famous television host recently lost her job after a tearful apology for not sufficiently understanding her own ignorance on a seminal cultural issue.

Last fall, we went through a confirmation hearing for a Supreme Court justice that centered on a sexual assault allegation that allegedly happened nearly 40 years ago and on the beer-drinking habits and nicknames of high schoolers during the Carter and Reagan presidencies.

I want to be very clear: This piece is in no way meant to take a stand on any of the allegations or behaviors that have rocked our political and entertainment worlds. It’s also not to address serious charges of illegal behavior. I am here neither to signal my virtue, condemn anyone, nor to exonerate any of the accused.

I hope to raise some questions to add to the conversation—which has been less of a conversation and more of a series of spitball fights and one-sided beatdowns.

What seems to be missing in these scandals is any serious consideration of the power of time in human affairs. With that loss, we exhibit some of the worst vices humans are subject to and shrink the virtues we should all exhibit.

Because we are human, we are subject to change over time. Probably no animal changes more than humans are capable of during our lifetimes (though I am wondering about butterflies and frogs right now). We change from innocent and suckling children to learning adolescents, to hormonal teenagers, to young adults, to responsible parents and professionals, and on into calm maturity of older age. Along that journey, our views change, our ideas evolve, our values mature, and our priorities are reset. Some of us get better; others get worse.

Our laws understand that we change over time, giving us the power to drive at 16, to vote at 18, and to drink alcohol at 21. Our loved ones understand the power of change by forgiving teenage transgressions and occasional mistakes later, understanding that we sometimes must accept apologies so we can all move on, giving the transgressor the benefit of the doubt. Such forgiveness often helps the forgiver as much as it does the forgiven.

Amid the cultural battles that have raged during the last few years, there seems to be little account given for change and even less for forgiveness. If a person has lived a good life and served good causes for 40 years but made a nonlegal cultural mistake when he or she was in their 20s, should we dismiss those decades of service and growth? Should we condemn a grandparent in 2019 for the views or actions of a 20-something in 1980?

We can all agree that this morning’s transgression should convict us this afternoon, but how far back should we be condemned? Should there be any such thing as a cultural statute of limitations?

There have been some major recent examples of forgiveness, most notably, how evangelicals seemed to forgive Donald Trump his many alleged sexual transgressions and demonstrated attitudes so they could support his presidential campaign. To many of us, that willingness to forgive and forget is still a bit puzzling, but perhaps it should not be when we consider that redemption and forgiveness is at the very core of the Christian message.

In the more recent scandals, it seems to be the elite in the United States who are not willing to forgive, forget, or give the benefit of the doubt to people faced with monsters dug up from decades-old graveyards. It is not the average American, but the elite political activists, media, and ambitious political leaders who seem so unwilling to assume people can change. That fact seems borne out in what is happening in Virginia—an elite outcry demands the governor resign, but polling of average voters shows they believe he should be given another chance.

But average voters aren’t really part of the conversation. They aren’t promoted on network television news and aren’t offered guest spots on cable shows. Activists and political leaders with the megaphones of celebrity and connections drive the conversation and the fate of those accused and unforgiven.

Again, this column is not to exonerate anyone or to express an opinion on any cultural issue. It is simply to urge that those driving our cultural conversation be willing to add to it questions of time, the dynamism of change, the possibility of redemption, and whether or not there should be a statute of limitations on our cultural mistakes.

Not many of us would want to be judged today by what we were like at 17, but most of us are not accused of great career-ending mistakes, either. Perhaps a wider conversation now might also help us instruct and preserve our young people who are living through the most filmed, photographed, and preserved age in human history. Forty years from now, we will count on them to lead, and will need them to be able to do so.