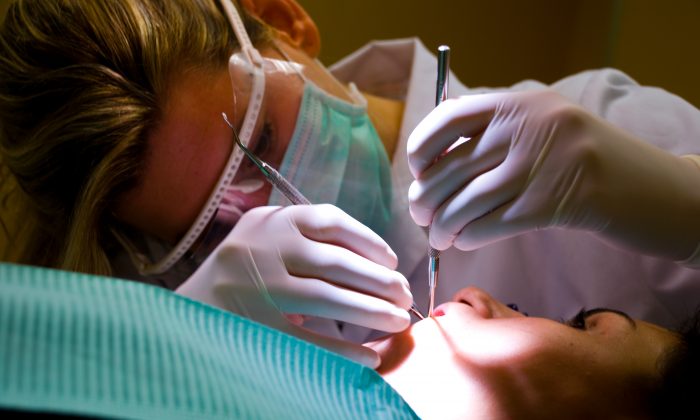 Should Dentists Test Patients for Diabetes?

Of the 29.1 million Americans living with diabetes, an estimated 8.1 million are undiagnosed. New research suggests that a trip to the dentist could be an effective way to identify people who might have diabetes and not know it.

Published in the American Journal of Public Health, the study of 408 dental patients shows that using gingival crevicular blood (GCB) [the blood found around the gums] for hemoglobin A1c (HbA1c) testing produces values that are nearly identical to those obtained using finger-stick blood, with a 99 percent correlation between the two samples.

“In light of findings from the study, the dental visit could be a useful opportunity to conduct diabetes screening among at-risk, undiagnosed patients—an important first step in identifying those who need further testing to determine their diabetes status,” says the study’s principal investigator, Shiela Strauss, associate professor of nursing at New York University.

The study builds on an earlier pilot study in which the feasibility and acceptability to patients and dental providers of using oral blood to screen for diabetes during a routine dental exam was demonstrated.

While anyone who is at-risk for diabetes but has never been told they have the condition can potentially benefit from the additional opportunity for diabetes screening, participants who are at least 45 years old might especially reap great benefit from diabetes screening at dental visits, Strauss says. HbA1c testing at dental visits could also serve as an additional opportunity to determine the extent of glycemic control among those already diagnosed.

“Our study has considerable public health significance because we identify the value and importance of capitalizing on an opportunity at the dental visit (a) to screen at-risk but as yet undiagnosed patients for diabetes (especially those 45 years or older), and (b) to monitor glycemic control in those already diagnosed so as to enable them to maintain their health to the greatest extent possible,” Strauss says.

*Image of dentist from Conor Lawless/Flickr