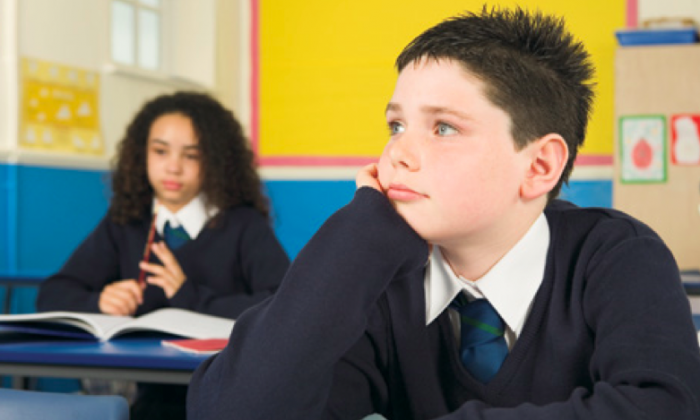 A boy sits in a classroom in school. (Cultura Motion/Shutterstock)
Wise Parenting for Modern Times

Should Children Learn Civics and Economics?

Imagine being a parent who is unwilling or unable to have the sensitive “birds and bees” conversation with your child—an important topic to be treated in a delicate manner. We as parents want to frame this discussion appropriately and respectfully. Could you imagine abdicating this role and relying on others to fill this void for you?

Before our children are inundated with conflicting values and controversial ideas in their social circles and online, we want to equip them with the right information. It’s a dangerous world, after all.

Now imagine parents being unwilling or unable to talk about civics and economics with their children—probably the majority of us. The world is full of controversial ideologies, dangerous political trends, logical fallacies, and bad economics. For our children’s personal and professional sake, shouldn’t we similarly prepare them for the world’s chaotic bombardment of influences before we leave them to their own devices?

Schools Are Leaving a Void

It’s natural to assume, as many parents do, that this is what school is for. But are today’s schools adequately introducing these concepts? I submit that they aren’t—and the effects are rather disastrous.

Let me offer an example before I explain. I encountered a video last year featuring brief interviews with high school seniors about a range of basic civic concepts. One would assume that after years of schooling, these students would be at least moderately proficient in basic knowledge like who fought in the Revolutionary War, what the various branches of government are, or what the difference is between socialism and capitalism.

And yet, the answers pointed to a spectacular failure. One after another, these seniors looked dazed and confused, most of them either admitting ignorance or attempting to guess.

Can’t we do better? Don’t we want better for our children? I certainly do. I recall several years ago wanting to teach my son some basic concepts about the free market and the principles that made America great: property rights, individual liberty, justice, and more.

I turned to Amazon hoping to find books to help, but came up empty-handed. So I began writing my own—and nine books later, the Tuttle Twins series has sold nearly half a million copies to parents who recognized, like I did, that our children need to be prepared with these ideas, and that schools aren’t doing it for us.

We have to take the matter into our own hands.

Whether you’re worried about the economic and civic literacy of the rising generation or merely your own child’s personal and professional success, the concern is the same: Most curricula and schools have failed to instill these time-tested values into the rising generation. The levels of both discourse and ignorance evident today are exhibit A of our collective failure to ensure our children are equipped with this knowledge.

When I set out to produce the book series—aimed at kids aged 5 to 11—the biggest question on my mind was whether little people could understand big ideas. Could it be that we parents simply don’t talk about these complex ideas merely because we feel they are best left for adults?

The results have been amazing—thousands of families have sent us messages about how their dinner conversations have become deeper, more meaningful, and relevant to helping their children understand the way the world works. Who doesn’t want that for their children? Why isn’t every school introducing these ideas to children?

Let me offer one specific example of many to illustrate what we’ve seen.

Amy has three children, aged 6, 9, and 13. She told me she was frustrated that her kids were bored all the time with what they were learning. They would come home from school, and when asked what they’d learned that day, would respond with “eh, nothing” most of the time. Sounds familiar, right?

Then she began using the Tuttle Twins books along with some of the accompanying activity workbooks. Here’s what she said happened: “It’s almost as if my children’s minds had a spark ignited. We had such interesting conversations after reading together, and I was so amazed seeing my little children understand these big ideas … things like justice, central planning, entrepreneurship, and more!”

But here’s where things really got interesting: “If I’m being honest, though, I realized when reading through these books that I was learning alongside my children … and when they would ask me a question, I often didn’t know. ‘Mom, isn’t eminent domain stealing since the government is taking somebody’s property?’ How do you answer that coming from a 9-year-old? It made me realize that I didn’t really understand many of these ideas well, and so we had to learn together.”

And there it is—the real reason I think many of us don’t talk to our children about these complex topics is that we feel we don’t understand them very well. They weren’t taught to us in school. We can’t teach what we don’t know.

Time to Learn Together

While that can be perceived as a problem, I see it as an opportunity. Amy realized it was a chance for her to learn alongside her children, with challenging questions being asked and explored in a safe environment. What better way to gain an understanding of how the world works than to have families explore these topics together, sharing what they’re learning and testing their ideas as they mature and progress.

As the saying goes, those who don’t learn from the past are condemned to repeat it. We parents must ensure that our children learn from the mistakes of the past so as to avoid them, thus setting them up for success in their personal and professional pursuits. We can’t leave that task to others; schools aren’t filling this void.

We also don’t have to wait until our children become adults, nor should we delegate the job to others we don’t know, trust, or agree with. Let’s step up and fulfill our role as the primary educators of our children to ensure that they’re ready for the onslaught of ideas and ideologies to which they will soon be subjected.

Connor Boyack is the author of the nine-book “Tuttle Twins” series for children and the president of The Association for Teaching Kids Economics, which helps K–8 students learn the ideas of a free society.