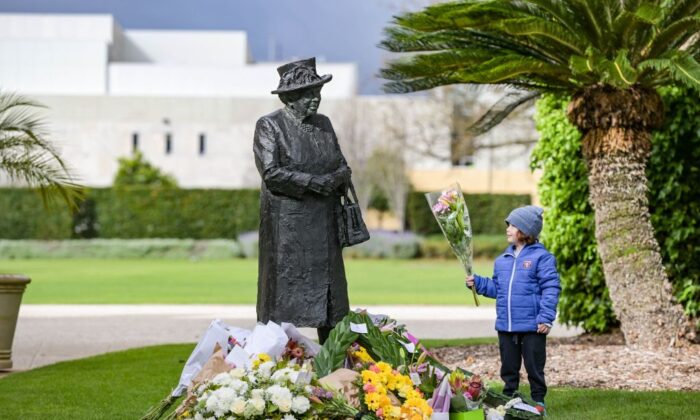 A 10-year-old boy places flowers at the base of a statue of Queen Elizabeth II after her passing at Government House in Adelaide, Australia, on Sept. 9, 2022. (Brenton Edwards/AFP via Getty Images)
Viewpoints

The billions of people who watched the funeral of Queen Elizabeth II on television on Sept. 19 would have been impressed with the ancient pomp and ceremony of this historic event. There is no doubt that the English are particularly good at organising grandiose events.

The funeral cortege, featuring the state gun carriage that carried the coffin of Queen Victoria in 1901, the colourful costumes, the choreographed traditional routines, and the religious service and music in Westminster Abbey all contributed to a majestic and memorable television broadcast.

Of course, the Queen, having reigned the United Kingdom for over 70 years and served as Head of State of 15 other independent countries, certainly deserved this splendid state funeral.

The Australian government has selected Sept. 22 as the day to honour the late monarch and mourn her passing—a National Day of Mourning.

A memorial service for the Queen is also planned for that day in Canberra, and Parliament has been suspended for two weeks.

The National Day of Mourning to mark the passing of the Queen is, of course, supported by the appropriate advice of the civil service.

Nevertheless, the decision to have a one-off public holiday appears to be insincere.

Problems With This Decision

Although a majority of Australians will welcome an opportunity to have this extra public holiday, this decision is nevertheless flawed and for good reasons.

First, if it were deemed necessary to have a public holiday to mourn the passing of the Queen, it really should have been observed on the day of the funeral. It would have made sense because the international community said their goodbyes on that day.

But, in selecting Thursday as Australia’s day of mourning, people would no longer be emotionally affected by the funeral. Thursday’s public holiday will effectively be just another work-free day, but it is unlikely to be a day of mourning.

Second, the most important downside of the government’s decision is that the country will be losing a vast amount of revenue and income—money which the country cannot afford to lose considering the extravagant spending by the previous Coalition government in its fight against the COVID-19 pandemic.

SBS Finance Editor Ricardo Gonçalves estimates that $2 billion (US$1.3 billion) will be lost in productivity on the day.

Businesses that are already having a difficult time, may thus be losing a significant amount of income.

Some people might even be annoyed because the holiday adversely affects their normal activities planned for the day, for example, hospital patients who had booked surgical procedures.

Many employees could also be thinking that they may as well turn this one-off public holiday into a four-day break by taking a sick day on Friday. If many people do not work on Friday, the economic cost to the country will be devastating.

Tahli Blackman of 9 News estimated that a spike in absenteeism could cost $461 million (US$308 million).

In her article, Blackman refers to a statement by Personal Finance Specialist, Taylor Blackburn, who is quoted as saying that “This is how Black Friday got its name in the U.S.—with the Thanksgiving holiday always on Thursday, many workers would not come in on the Friday—hence it was a dark day for owners.”

But, as the National Day of Mourning is going ahead, it will hopefully be used as an opportunity to reflect on and to say thanks for the extraordinary life of Elizabeth II, Queen of Australia.