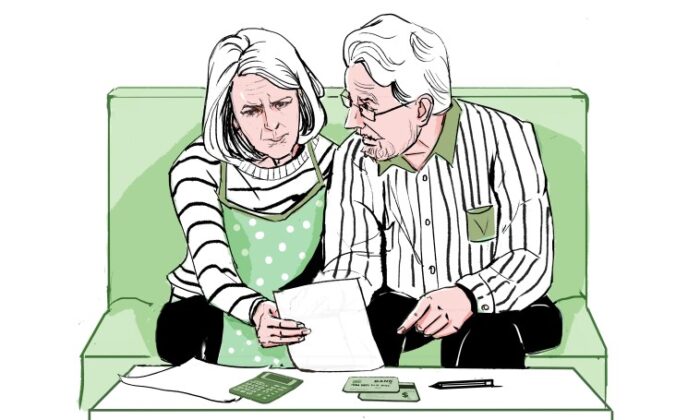 One big reason the "earnings sharing" proposal never went anywhere is the negative impact it would have on a married couple's potential benefits. (Fei Meng)
Business Columnists

Should a Housewife Get Social Security Credits?

People frequently write to me with an idea to change Social Security law in some way that they think is clever and unique. But I usually must tell them that their proposal has been considered in the past.

After all, Social Security has been around for 80 years now, and for all of those eight decades, people have been coming up with plans that they think would improve the system. And lots of times, those plans don’t work out under closer scrutiny. Here’s an example of what I’m talking about.

Q: I have been a stay-at-home mom and housewife for the past 40 years. Other than a few years when I worked before I got married, I’ve never paid into Social Security. So, I am due no benefits on my own record. I will only be due benefits on my husband’s record. I don’t think that’s fair. I should get some kind of Social Security credit for all the work I’ve done as a wife, mother, and homemaker. I think a certain amount of money—maybe $1,000 per month—should be added to the Social Security record of all women who choose to stay home and make a career as a homemaker.

A: Actually, that’s an idea that’s been tossed around many times in the past. Not quite the way you propose, but something similar. It’s usually called “earnings sharing.” I’ll explain what that is in a minute. But first, let me explain why your specific idea wouldn’t work.

And then you would also have to decide how to handle women who work part time and stay home part time. For example, my daughter-in-law works about 20 hours per week. The rest of the time, she’s home being a mom and housewife. So instead of the $1,000 per month Social Security credit you suggest that full-time homemakers get, should she get $500 added to her Social Security record?

And what about women who work full time but then also come home and do lots of work around the house? Shouldn’t they get some kind of Social Security credit for the housework they do?

And for that matter, what about a man who works full time but comes home and watches the kids, does some laundry, cooks a meal, or does the dishes? Should he get Social Security credits for the housework he does?

I hope you see where I’m going with this. Your proposal, although well-intentioned, would be extremely difficult to implement and administer. To say nothing of all the extra costs that would be added to an already overburdened Social Security system.

That’s why when ideas like yours were kicked around in the past, many Social Security reformers came up with what they thought was a better solution. It was called “earnings sharing.”

On the surface, this might sound like a good idea to some. But one big reason this plan never went anywhere is because of the negative impact this plan would have on a married couple’s potential Social Security benefits.

Now let’s say that the “earnings sharing” rules had been in place all the years that Fred and Wilma were married—meaning they each got half of Fred’s earnings added to their Social Security accounts. Well, that means Fred would end up with a Social Security benefit of about half as much as he was due under the current system. In other words, Fred would start getting $1,500 per month when he retired. But his wife Wilma, who had equal earnings on her Social Security record, would also get $1,500 per month.

That’s good news for Wilma. She gets her own Social Security check. But for the two of them as a married couple, it’s bad news. Fred gets $1,500 per month and Wilma gets $1,500 per month, giving them combined benefits of $3,000 per month. But that compares to $4,500 in total benefits they’d be due under the current system.

Also, under an “earnings sharing” arrangement, things really don’t work out for Wilma after Fred dies. Under the current system, Wilma the widow would get her spousal benefit of $1,500 per month bumped up to Fred’s $3,000 rate. But with “earnings sharing,” where they each end up with identical monthly benefits of $1,500 per month, there is nothing extra to bump up to—so Wilma would get no widow’s benefits.

Those of you who think “earnings sharing” might be a good idea should remember that old saying: “Be careful what you wish for!”

Tom Margenau
Follow
Tom Margenau worked for 32 years in a variety of positions for the Social Security Administration before retiring in 2005. He has served as the director of SSA's public information office, the chief editor of more than 100 SSA publications, a deputy press officer and spokesman, and a speechwriter for the commissioner of Social Security. For 12 years, he also wrote Social Security columns for local newspapers.