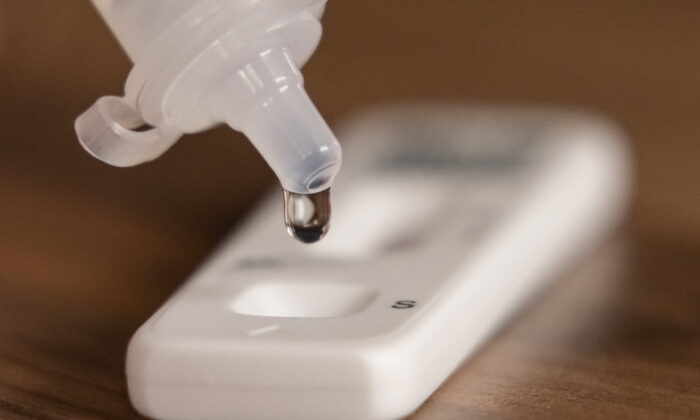 People who test positive for COVID-19 in England may now end isolation after five full days if testing negative twice on day five and day six.

The new rule came into effect on Monday as ministers hinted that more restrictions could be removed after Jan. 26.

Without tests, the default length of self-isolation remains 10 days.

The government has said that modeling suggested 7 percent of people who end isolation on day six after two negative lateral flow tests may still be infectious. Therefore, those who are released early by test results are “strongly advised to wear face coverings and limit close contact with other people in crowded or poorly ventilated spaces.” They are also told to work from home if possible and to minimise contact with people at higher risk of getting seriously ill from COVID-19.

Self-isolation rules for close contacts of COVID-19 cases have not changed, meaning unvaccinated adults are required to isolate for 10 days if one of their close contacts test positive for the CCP (Chinese Communist Party) virus. Vaccinated contacts are not required to self-isolate, but are encouraged to take daily tests.

Ministers had been under pressure to reduce the isolation period—which was previously one day longer—to help address staff shortages across the economy and public services by allowing people to return to work earlier.

Education Secretary Nadhim Zahawi said he’s “confident” that England will be “in a much better place” so other restrictions may be lifted on Jan. 26, when ministers are due to review the current restrictions.

The government brought in its “Plan B” restrictions after the arrival of the Omicron CCP virus variant, including compulsory face coverings in indoor public spaces and COVID Passes for nightclubs and large events.

It also told secondary school pupils to wear masks during lessons. The rule is facing a legal challenge from UsForThem, a group of parents campaigning against CCP virus restrictions, and a number of Conservative lawmakers have backed the challenge.

Zahawi said on Monday that new hospitalisations involving the CCP virus appear to have peaked.

“If you look at infection rates, they remain high, hospitalisations are still high, touching 20,000 people in hospital, but it feels like they’re plateauing,” he told “BBC Breakfast.”

“The good news is the number of people in ICU has been coming down, certainly in London, which was the epicentre, the level of staff absence in education has remained pretty flat. It was 8 percent before Christmas, it’s at about 8.5 percent at the moment.”

The former vaccines minister hinted that Plan B restrictions may be lifted after next week.

“I’m confident that when we review this on Jan. 26, as we said we would do, then we’ll be in a much better place to lift some of these restrictions,” Zahawi said, adding that England now has “the most open economy in Europe” because ministers “stuck to Plan B.”

Downing Street also said there were “encouraging signs” in the data.

The prime minister’s official spokesman said the “maximum amount of time possible” would be given to prepare for any changes in the rules.

“In terms of the data, there are some encouraging signs that infections are falling across the country,” he said, adding that the ministers will also want to see the trend reflated in the latest data from the Office for National Statistics.

“There are also some signs of falls—or at least plateauing—in admissions and occupancy in hospital, which is good to see,” he said.

“But it still remains the case that our NHS is under significant pressure, there are over 16,000 COVID patients in hospital in England alone.”

The spokesman said the Cabinet is “keeping a very close eye on the data” and believes the government’s CCP virus policies are “offering massive protection to the public.”

The latest data from NHS England showed that almost 45 percent of people in acute NHS trusts on Jan. 11 were primarily treated for other things.