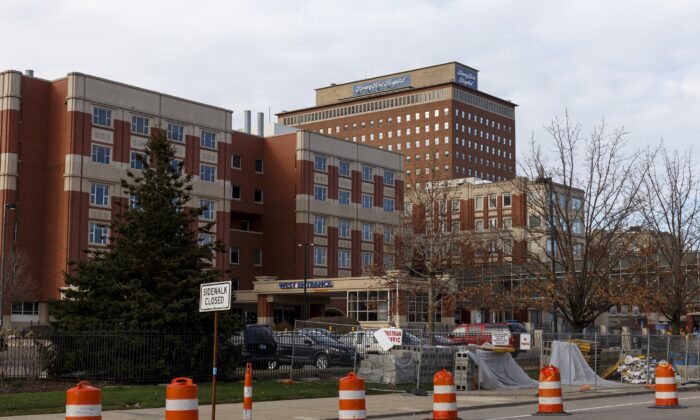 A view of the front entrance to Henry Ford Hospital in Detroit, Mich., on April 8, 2020. (Elaine Cromie/Getty Images)
By Steven Kovac

The action comes as a fourth wave of the CCP (Chinese Communist Party) virus, the pathogen that causes COVID-19, has caused hospitals to be swamped with patients.

Henry Ford Health and Beaumont Health, along with most of Michigan’s hospital chains, implemented requirements earlier this year for all of their employees to be vaccinated against the CCP virus. Those who refuse to do so face suspension, firing, or resignation for refusing the shot.

Henry Ford Health System hasn’t disclosed the number of employees it has lost due to noncompliance with its mandate. Data quantifying the nursing shortage in Michigan are hard to come by.

At a Sept. 9 press conference, Brian Peters, CEO of the Michigan Health and Hospital Association, said that no precise figures will be available until a statewide study is completed later this year.

“What I can tell you is … I have never heard a consistent theme from across our entire membership like I have on this staffing issue,” Peters said. “Right now, our staffing is stressed to a level that we have not seen previously.”

In a statement released by Beaumont Health on Sept. 15, CEO John Fox outlined another cause for the flood of patients at the system’s eight hospitals.

“Many people delayed getting tests and treatment for medical issues because of their concerns about the pandemic. Now, more than a year and a half after the pandemic began, those delays in care are resulting in medical emergencies,” Fox said. “Add in a staffing shortage and you have a perfect storm.”

In an interview with The Epoch Times, a former Henry Ford physician, Dr. Mo Talia, who was recently stripped of his hospital privileges for refusing the CCP virus vaccine, questioned the wisdom of “letting go badly needed nurses and other health care workers at a time when they are needed the most.”

Former Henry Ford nurse Katie Kirn, who was also let go for refusing to get vaccinated, told The Epoch Times: “I absolutely think the bed cuts are due to staffing (shortages) because of the mandate.”

Former Henry Ford nurse Kristen Noble, who also lost her job for refusing to be vaccinated, told The Epoch Times that a pandemic was no time for a health care system overwhelmed with patients and already short on staff “to be firing health care personnel.”

“I absolutely believe there is a correlation between the suspension of staff and systems cutting beds,” Noble said.

Henry Ford Health System’s announcement of the bed cuts came on Sept. 13, three days after the system’s Sept. 10 vaccination mandate deadline. Vaccine refusers were given until Oct. 1 to change their minds.

“They do not have enough staff to care for their patient load,” Noble said. “Patient safety takes a big hit with being short-staffed.”

In a Sept. 13 press briefing, Henry Ford’s chief clinical officer, Dr. Adnan Munkarah, said that despite the staff shortages and resultant bed cuts, “our patients continue to receive the highest and safest level of appropriate care from our care teams.”

“As a practical matter, this policy may result in exacerbating the severe workforce shortage problems that currently exist … which the American Nurses Association has called a national crisis,” Pollock said in a Sept. 9 statement.

According to the Michigan Annual Nursing Survey for 2020, nearly one in five registered nurses and licensed nurse practitioners have said they plan to leave the profession within the next five years.

The survey of more than 40,000 Michigan nurses found that one in five cited too heavy a workload, stress, safety issues, and not enjoying the profession as some of their main reasons for leaving.

According to the Michigan Hospital Directory, the state has 185 hospitals with 26,632 beds. As of Sept. 20, 30 of the state’s hospitals were at 85 percent or higher occupancy, with the average occupancy rate being 78 percent.

The state of Michigan’s official virus-tracking website shows that on Sept. 20, there were 1,492 adults in hospitals sick with the virus. From Sept. 18 through Sept. 20, there was an average of 2,395 new cases per day.