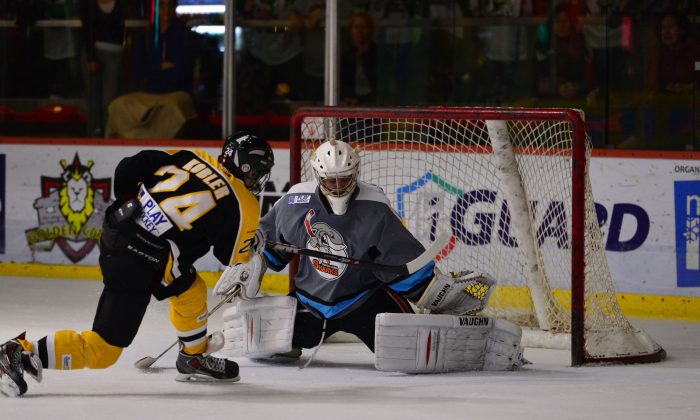 Tim Kobler scores the winning goal for the Hong Kong Tycoons in the shootout with South China Sharks in their CIHL match at Mega Ice on Saturday Dec 14, 2013. Tycoons won the match 6-5. (Bill Cox/Epoch Times)
International

Hong Kong Tycoons and South China Sharks put on a blistering display of Ice Hockey that could only be decided by a shootout after added time at Mega Ice on Saturday Dec 14.

Although Tycoons came away with the win, the result shows just how close these two are in the 4-team China Ice Hockey League.

In the other match, competition leaders Macau Aces continued their winning run this time over the desperate, but not despondent, Kowloon Warriors. Warriors fought all the way to the end, but could not stop the Aces onslaught.

This keeps the Aces on top of the table with a 3-point lead over the now second placed Tycoons.

Tycoons vs Sharks
In a tight first period with both teams probing for openings Jordan So was the only scorer putting the Sharks into a 1-0 lead.

A frantic battle ensued in Period-2: Sharks consolidated their lead with early and late period goals by Jordan So to complete his hat-trick and Justin Cheng added another 4 minutes into the session. A fight back by Brennan Sonne and Adam Maglio kept the Tycoons in the hunt, but with a 2-4 score line they had a lot to do the final period.

Tycoons played valiantly in period-3 with Brennan Sonne and Andrew Alari notching goals to pull the Tycoons back onto level terms at 4-4. But, not to be outdone, Sharks Jordan So scored with 3½ minutes remaining to edge ahead. With time running out, hero Brennan Sonne equalised for Tycoons to tie the match at 5-5 at full time.

In the 3 minutes of overtime, the attacks continued at each end, but the deadlock could not be broken and it went to a shoot-out to decide the winner.

After an even battle during overtime, great keeping by the Tycoons’ goalie Dean Tzembelicos continued in the shoot-outs. His save on Sharks’ third shoot-out attempt gave his team an opportunity to clinch the match. Tycoons’ Tim Kobler got the puck past the Sharks’ goalie to make the final result 6-5.

The result meant that Sharks won a point for their ranking position and the Tycoons won 2 points placing them in second, just 1 point above the Sharks in the standings.

Aces vs Warriors
Kowloon Warriors showed good promise at the start of their match against Macau Aces with Eric McKenna scoring in the first half minute of the game.

But Aces were successful with raids on the Warriors goal by Yannik Wong and two by Andy Brine bringing Period-1 to close at 3-1.

Andy Brine completed his hat-trick early in the Period-2 and Christian Long extended the Aces lead to 5-1, before Devin Welsh and Art Tam pulled the score back to 5-3. But the recovery was short-lived as Jeff Griffin chalked up another for the Aces late in the period to make the score 6-3.

Warriors’ McKenna scored his second of the match in the 3rd stanza reducing the deficit to 6-4, but while Warriors sidelined their goalie and pushed forward in an attempt to close the gap, Aces’ Jeff Griffin snatched a chance to score giving the Aces a 7-4 win.