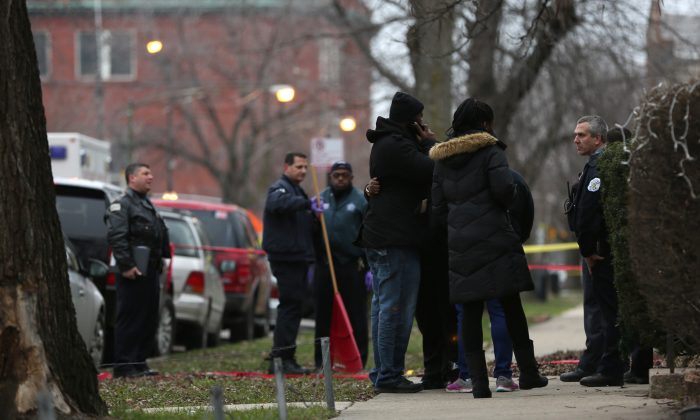 Chicago police officers talk with relatives of one of the two people killed by a police officer, as they investigate a shooting in the entry of their apartment in Chicago on Saturday, Dec. 26, 2015. (Abel Uribe/Chicago Tribune via AP)
Crime and Incidents

At least 68 people were shot and nine were killed in Chicago over the long holiday weekend, according to police.

Chicago Police released the figures for the four-day Thanksgiving weekend on Monday. In comparison, 8 people were killed and 20 were wounded in shootings over last year’s holiday weekend.

The Chicago Tribune’s latest data shows that around 4,000 people have been shot in the city in the first 11 months of 2016, which is about 1,000 more than in 2015. According to DNAInfo’s homicide tally, 681 people have been murdered.

The latest homicide occurred at around 2 p.m. on Sunday in the Gresham neighborhood. The victim was identified as an 18-year-old man who was sitting in a parked car, police said, according to NBC Chicago.

Ten minutes earlier in the East Garfield Park neighborhood, a 37-year-old man was gunned down, police said. The victim was identified as Rickey J. King. Someone across the street opened fire at King, who was with a group of people. He was shot in the head and was pronounced dead at the scene, police told NBC. The assailant fled on foot.

At 2:38 a.m. Sunday, a victim identified as Erik Peoples, 30, was shot and killed in Homan Square neighborhood on the West Side, police said.

At 3:38 p.m. Saturday, a 56-year-old man who was not identified was shot and killed in the South Side Woodlawn neighborhood, said police.

At 2:15 a.m. on Saturday, two gunmen shot and killed a 20-year-old man at a house party in the South Chicago neighborhood. They also struck another 20-year-old man who was shot in the groin, while several others were injured, police said.

Four other people were gunned down over the weekend, the NBC report stated.

Meanwhile, Chicago police say they fatally shot a man suspected of shooting a pregnant woman during a domestic disturbance. Two officers were injured during the response, reported The Associated Press.

The fatal police shooting was not included in the overall homicide tally for the weekend.

Police say in a statement officers responded about 11:30 Sunday night to a domestic violence call in the West Garfield Park neighborhood and the man fled. Police say he fired at officers twice before officers returned fire.

Police say one officer had an injury consistent with a graze wound from a bullet and another officer suffered a leg injury and reported chest pains.

Police say a 24-year-old pregnant woman was found shot. She was taken to a hospital and listed in serious condition. They say the officer or officers involved will be on routine administrative duties for 30 days.