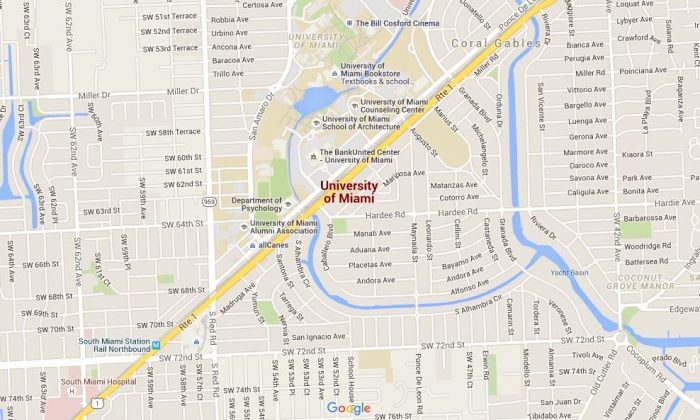 The University of Miami and Florida International University (FIU) issued alerts on Thursday afternoon amid gun threats. (Google Maps)
US

UPDATE: UM says 'there is no threat to the campus'
By Jack Phillips

There is no threat to the campus. https://t.co/iOo5Z0VHYZ

UM later tweeted: “Safety of our students is of paramount importance. Administration is aware of the matter, and proper steps to ensure safety have been taken.”

Safety of our students is of paramount importance. Administration is aware of the matter, and proper steps to ensure safety have been taken.

A student threatened to “shoot up” a class, reported Local 10.

UM’s newspaper tweeted police were called into the University’s School of Communications after the student issued the threat.

Meanwhile, a FIU student went on social media to warn other people at the Modesto A. Maidique campus, telling them to stay inside after police received a similar type of threat, Local 10 reported.

Later, FIU posted a tweet saying that police got a threat, saying FIU is going to “be on the news tonight.”

It said campus police department “received reports of comments indicating” a threat at the university. “The individual who made the comment or the intent of the comment” haven’t yet been confirmed, it added. “There is no verifiable or actionable threat,” it also stated.

“FIU mourns the victims of the recent events that have occurred both at home and abroad,” the statement read. “FIU understands the state of heightened sensitivity and alarm that some may feel.” The university was likely referring to the mass shooting in Southern California that left 14 dead, according to the latest reports, and the Paris terrorist attacks that left 130 people dead several weeks ago.