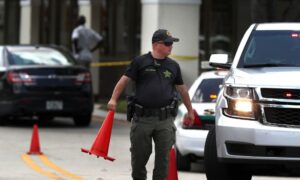 A 6-year-old and an 8-year-old were critically injured in the incident, authorities confirmed to local media outlets.

The Cincinnati Police Department said that several individuals were shooting at the intersection of McHenry and Cavanaugh avenues, and they know of at least two suspects who fled on foot.

CPD spokesperson Emily Szink said in a statement that two adult male teenagers were taken to a local hospital for their injuries.

“I believe the children were just hanging out in that lot, and it’s just a tragic, tragic situation, it’s awful,” John also said. “Thoughts and prayers go out to the families in an incident like this. I mean, this is just, you can’t explain it. It’s a Saturday evening in the summer. It’s just a terrible situation.”

He added: “We can tell that from the shell casings left at the scene, multiple weapons used, at least two [suspects] we can confirm, but like I said, it’s possible there were other shooters as well.”

Other details about the shooting were not provided.

Witnesses are asked to call the Cincinnati Police Department’s Crimestoppers at 513-352-3040.