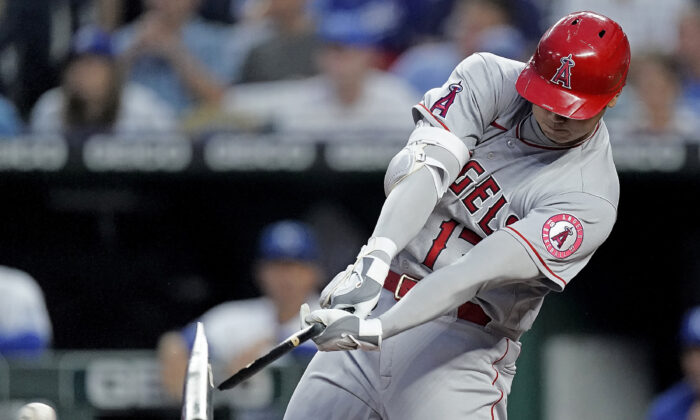 Los Angeles Angels' Shohei Ohtani breaks his bat as he hits a foul ball during the fifth inning of a baseball game against the Kansas City Royals in Kansas City, Mo., on July 26, 2022. (Charlie Riedel/AP Photo)
Baseball

KANSAS CITY, Mo.—The Angels’ Shohei Ohtani fanned on three pitches during his first at-bat against the Royals on Tuesday night.

His next at-bat set the tone for the rest of the game.

The Angels piled on from there, getting a bases-loaded double from Luis Rengifo and a late home run from Max Stassi, while Jose Suarez and their bullpen dominated Kansas City in a 6–0 victory.

“We lean on him a lot,” Angels interim manager Phil Nevin said of Ohtani, who showed no lingering affects from a foul ball he took off his thigh Monday night. “He hit that ball 110 miles an hour and it barely got out. This is a big park.”

Suarez (2–4) scattered three hits and a walk over 5 1/3 innings before the Los Angeles bullpen, which was hammered by Kansas City in a series-opening loss, rolled through the same bunch to clinch the Angels’ first win since July 13.

They also kept Kansas City from winning four consecutive games for the first time this season.

“I came to battle today because my last outing wasn’t too good,” said Suarez, who had given up 10 earned runs in his last two starts combined. “I set a goal to keep battling and do better in the second half.”

The Royals’ Angel Zerpa (2–1) allowed two runs, one earned, on four hits and a walk before departing with a right knee injury in the fifth. His own bullpen didn’t do him any favors, in particular Wyatt Mills, who hit a batter with the bases loaded to push across a run and wound up allowing three runs on three hits, two walks and two hit batters.

Zerpa had mostly kept the Angels in check in his recall from Double-A Northwest Arkansas, the only damage on Ohtani’s 420-foot shot to center field in the third inning. It was his sixth homer in 17 career games against Kansas City.

Then in the fifth, Zerpa was attempting to run down a grounder down the line when he reached to glove the ball and flip to first. Zerpa wound up making an awkward movement that caused him some knee pain and, after trying to make a couple of warmup pitches, departed with runners on the corners and nobody out.

“He was great. You just love watching him pitch, his style,” Royals manager Mike Matheny said. “He just felt something in his knee. They’re going to take a look at it, but it didn’t feel good.”

It looked as though the Angels might squander a good scoring chance, especially when Michael A. Taylor ran down a shallow fly off Ohtani’s bat. But then Amir Garrett unloaded a wild pitch that allowed Phil Gosselin to score for a 2–0 lead, and the Angels proceeded to score three times in the seventh before Stassi’s 422-foot homer in the ninth.

The Royals’ best scoring chance came in the sixth, when Nicky Lopez was hit by a pitch and they loaded the bases. Jose Quijada entered and got a force out at home before getting Vinnie Pasquantino on an inning-ending fly out.

“Our bullpen did a heck of a job,” Nevin said. “Quijada was phenomenal.”

Royals RHP Jackson Kowar was optioned to Triple-A Omaha to make room for Zerpa on the roster.

Royals: SS Bobby Witt Jr. (hamstring) hit in the cage before the game but was out of the lineup for the second straight night.

The Angels are recalling RHP Janson Junk (0–0, 0.00 ERA) from Triple-A Salt Lake for his second big league appearance and first start this season in Wednesday’s finale. RHP Brad Keller (5–10, 4.16) is getting the nod for Kansas City.