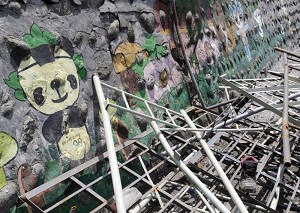 Bed frames salvaged from a destroyed school are seen on the debris in Dujiangyan of Sichuan Province, China. Parents of students who died when the middle school they were in collapsed during the quake have vowed to pursue a thorough investigation of the condition of the school. (China Photos/Getty Images)
China

A recent structural appraisal of a middle school that collapsed in the Sichuan earthquake found the building to be in a “dangerous condition” before the quake. Three hundred children died in the school collapse and their parents have vowed to ensure that justice is served. However, the local government appears to be blocking the report from being made public. The school is associated with the Dongfeng Turbine Factory Co. in Mianzhu City.

According to a report of China Tianwang Human Rights Service (CTHRS) on June 6, an appraisal task force, comprising five architectural design specialists, two government officials and one volunteer, was organized under pressure from parents of the students and the local community. Supervised by 13 of the parents who lost their children in the quake, the task force has completed the appraisal. The results indicate that the school's structure was in a hazardous condition before the quake.

Ren Zeyu, one of the 13 parents who supervised the appraisal, said, “The four-story building was constructed with porous bricks and precast structural beams. However, the beams were only used on the first and fourth floors, not on the second and third floors. Without any doubt, the building was a dangerous.”

According to Ren, the appraisal task force studied the school's original blueprint and found the building was designed and constructed by the Dongfeng Turbine Factory Co. in 1975. The task force's preliminary analysis found that:

(a) the building was constructed with porous bricks, leading to insufficient compression strength;
(b) the precast structural beams were not interlinked; and
(c) the foundation did not have ring beams except at a few locations on the first and fourth floors.

If these findings are correct, then the school failed to meet the most basic government building codes.

Zhou, whose son was killed in the incident, told the reporter, “It is totally up to the government. They told us a satisfactory reply would be made available on June 15.”

When asked what they should do now that it is known the building was dangerous before the quake, a parent responded, “Identify and arrest the corrupted bureaucrats. Our kids joined this school because they said they would revamp the school building.”

The parents also said that it took the five specialists three days to complete the structural appraisal. However, the specialists have no rights to issue an independent report. The appraisal's findings need to be approved by the authorities first before they can be made public.

Ren commented, “The specialists did not dare to answer you immediately even though they had known the building was dangerous—because they were dispatched by the authorities. You know the situation of the Chinese government. What we truly want to pursue is the liability of the Dongfeng Turbine Factory Co. for the innocent victims.”

Sources said the school was in disrepair for years and a plan to revamp the structure had recently been suspended. In significant contrast to other buildings in the neighborhood that survived the earthquake, the school building collapsed to rubble.

Mr. Ma, whose child was killed in the collapse, accused the authorities of indifference. “Parents are sad and angry,” he said.

School teacher Mr. Li, who was recovering from injury, also said he knew the educational building was a dangerous one. “It simply couldn't survive the quake.”

In a press conference held in Beijing on June 6, Wang Zhenyao, Director of the Relief Division, Ministry of Civil Affairs, promised to conduct a thorough investigation into the collapse of the school building and to transparently relay the findings to the public. Wang said the local government would commit itself to undertaking an in-depth investigation as soon as the situation in the disaster region stabilizes. Emphasizing that specialists would be invited to verify if the collapse is related to construction quality, Wang said open and transparent explanations must be made to the general public.