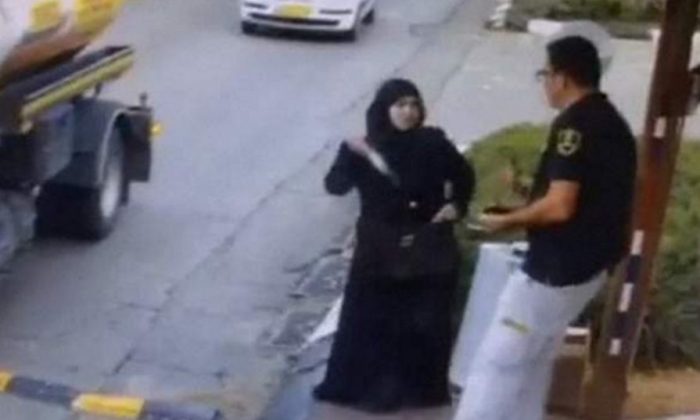 An incredible video shows a Palestinian woman pulling out a knife from her purse to stab a security guard at the southern West Bank, Israel.

The incident, which took place on Nov. 8 in the West Bank settlement of Beitar Illit in Gush Etzion, was captured on camera. The man was a civilian security guard in his 20s, and the attacker was identified as 22-year-old Halawa Alian, reported The Times of Israel. The video was later posted online (WARNING: Disturbing footage).

Alian was shot immediately after she stabbed the guard, identified as Yishai Kreitenberger. It’s unclear if she was killed. The man was only lightly injured in the attack and was taken to Shaare Zedek Medical Center in Jerusalem.

He told the Algemeiner Journal: “I was standing at the city’s guard post when I noticed the terrorist walking towards me…she was tense, looking around [as though] she was unfamiliar with the place.”

“As she approached, she presented her green Palestinian ID card.

“So I told her she could not enter. While I was talking, I saw her putting her hand in her purse. [When] I asked her why she was [doing that], she took out a knife and managed to scratch me with it.”

The Israeli Defense Forces said she was still being treated by medical personnel who took her to a hospital.

In the video, the woman is seen approaching the entrance gate of the city before talking to the guard. Soon after, she pulls out a blade and lunges at him.

Meir Rubinstein, the mayor of Beitar Illit, said that while a tragedy was averted, people in the settlement were “determined to go on, to continue with our routine,” according to Sky News.

On Sunday, a Palestinian driver was shot dead after intentionally crashing his car into a West Bank bus stop, injuring four people. The crash occurred at the Jewish settlement of Tapuach in the West Bank, an Israeli police spokesperson told Al Jazeera TV.