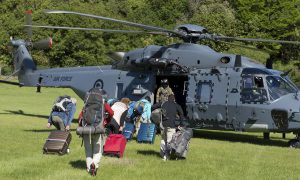 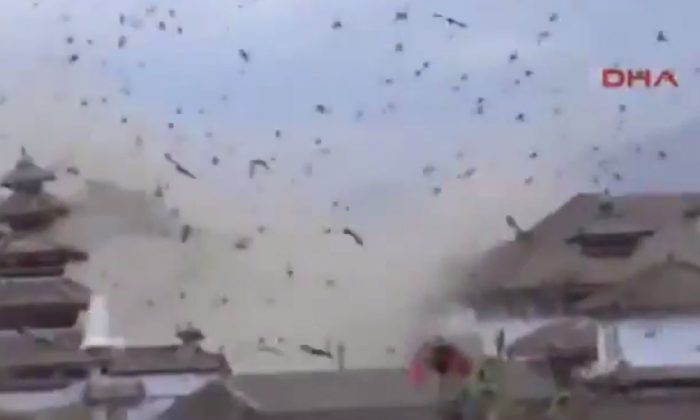 There’s been a number of videos uploaded of the devastating earthquake that hit Nepal over the weekend, killing thousands, but this one might be among the eeriest.

The footage shows birds filling the sky as the quake hits Katmandu, the country’s capital. As the quake shakes the the city, buildings are seen crumbling and dust fills the air.

Officials said Monday that at least 3,700 people were left dead by the earthquake, and there are fears that number may climb as rescue workers head to more remote areas in the country.

U.N. spokeswoman Orla Fagan said preventing the spread of disease is one of the most important things Nepal and aid workers need to do.

Nepalese officials said that the country’s nearly 100,000-strong army is focusing on rescue and relief efforts.

“We have 90 percent of the army out there working on search and rescue,” Udav Prashad Timalsina, the headofficial for the Gorkha district, told AP. “We are focusing our efforts on that, on saving lives.”

In other places like Kavre district, there have been reports of a large amount of homeless people. Sudarshan Parsad Dhakal, the district’s chief administrator, said that approximately 100,000 people have lost their homes, reported The Guardian.

“It is not just the buildings that are in ruins. There are many others that are now uninhabitable. We need at least 3,000 family tents, blankets too and dry food for three days,” he was quoted as saying by the paper.

A large number of Nepalese people are now living in tents and shelters following the quake and its numerous aftershocks. Some residents have expressed worry that another earthquake–or perhaps a strong aftershock–might hit in the coming days.