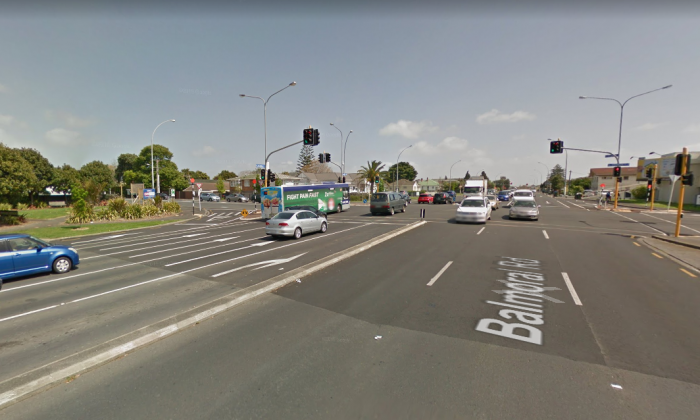 The incident happened near the intersection of Sandringham and Balmoral roads. (Screenshot via Google Maps)
Asia & Pacific

A motorist was horrified to see a body bag fall out of a boot of a hearse and roll across a busy road on Wednesday afternoon, Dec. 7.

The shocking footage was captured on the driver’s dash cam as he drove through Auckland, New Zealand.

The driver told the New Zealand Herald that he believed a body was on the gurney as it trundled through the busy road.

The video captures the moment the boot of the hearse flies open as it turns a corner. A body bag on a gurney then falls out the car and rolls down the intersection of Sandringham and Balmoral roads.

It stops rolling at the side of the road. Then the driver pulls up and rushes to the gurney, picking it up and placing it back in the hearse.

“I was a bit shocked, really,” the motorist, who did not want to be named, told the Herald.

“I heard this noise, and the next thing, you know, I saw the stretcher with the body on it flying through the intersection.”

The driver heard a bang and initially thought the timber had fallen from the car. He did not expect to see what looked like a body.

Funeral directors association of New Zealand: Fall from hearse will not happen again, via @nzherald https://t.co/Tnf053hxNv

Another witness of the incident, a staff member from Caltex, described the scene as “crazy” and he believed there was a body inside.

The undertakers have insisted that there was no body in the gurney.

“We have a vinyl square pillow to lay people’s head and at the foot-end of that stretcher there is a metal bar that can look like people’s feet,” said managing director of Davis Funerals Craig Little, according to the Herald.

The Funeral Directors Association of New Zealand has described it as a “rare mistake”, which was being investigated by the funeral home, the Metro reported.

Chief executive Katrina Shanks said it would not have happened if there was a body inside the bag.

“If there was a deceased person that was being transported, it would not have happened, as the system would have been different,” she said to the Metro. “It can be upsetting to members of the public, the funeral home is looking at it very seriously and that’s all we can do at this stage.”

She added, “Obviously no one wants to lose anything in the middle of an intersection, let alone a stretcher out of the back.”