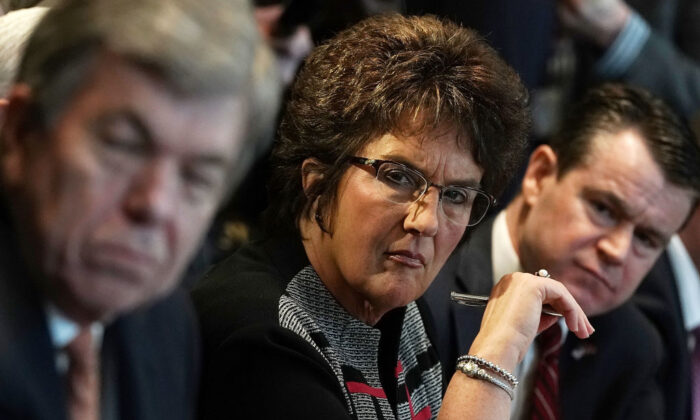 President Joe Biden issued a statement following the deaths of Rep. Jackie Walorski (R-Ind.) and two staffers who were involved in a head-on crash in Indiana on Wednesday afternoon.

Walorski was killed in an auto accident on state Route 19 near South Bend, Indiana. Her communications director, Emma Thomson, and her district office director, Zachary Potts, also died in the accident, officials said.

“Jill and I are shocked and saddened by the death of Congresswoman Jackie Walorski of Indiana along with two members of her staff in a car accident today in Indiana,” Biden said in a White House statement. “Born in her beloved South Bend as the daughter of a meat-cutter and firefighter, she spent a lifetime serving the community that she grew up in—as a journalist, a nonprofit director, a state legislator, and eventually as a Member of Congress for the past nine and half years.”

Biden said that Walorski came from opposite sides of the political spectrum “and disagreed on many issues” but said she was  “respected by members of both parties for her work on the House Ways and Means Committee on which she served.”

“We send our deepest condolences to her husband, Dean, to the families of her staff members, Zachery Potts and Emma Thomson, who lost their lives in public service, and to the people of Indiana’s Second District who lost a representative who was one of their own,” Biden said in conclusion.

The White House said it would order flags at federal properties to fly at half-staff after her death.

Prior to her election in 2012 to the House, Walorski served three terms in the Indiana legislature, spent four years as a missionary in Romania along with her husband, and worked as a television news reporter in South Bend, according to a biography posted on her congressional website.

Walorski was a lifelong resident of Indiana, according to her official biography. She served on the House Ways and Means Committee and was the top Republican on the subcommittee on worker and family support.

Confirming her death in a statement shared on Twitter by House Republican leader Kevin McCarthy (R-Calif.), Walorski’s office said: “Dean Swihart, Jackie’s husband, was just informed by the Elkhart County Sheriff’s office that Jackie was killed in a car accident this afternoon.”

His statement added: “Please keep her family in your thoughts and prayers. We will have no further comment at this time.”

And House Speaker Nancy Pelosi (D-Calif.) said in a statement that Walorski “passionately brought the voices of her north Indiana constituents to the Congress, and she was admired by colleagues on both sides of the aisle for her personal kindness.”

The Elkhart County Sheriff’s office said Wednesday that an investigation into the crash is underway.