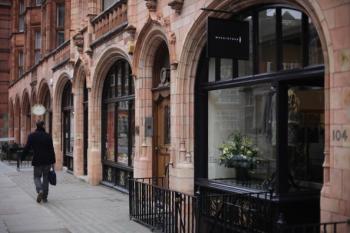 A man walks by the Mackintosh store in Mayfair on January 24, 2011 in London, England. Despite the expected retail slump confirmed by Office of National Statistics's (ONS), sales of luxury goods are booming, with many companies posting large profits. (Photo by Dan Kitwood/Getty Images)
US

Simon Veazey
Freelance Reporter
Simon Veazey is a UK-based journalist who has reported for The Epoch Times since 2006 on various beats, from in-depth coverage of British and European politics to web-based writing on breaking news.
View profile
Follow
biggersmaller
Print
The economy lost momentum in the cold before Christmas, earlier reports had suggested, but few economists had predicted the economic contraction that new official figures revealed on Tuesday.

The Office of National Statistics's (ONS) estimate of growth figures shows that the economy shrank in the last quarter of 2010, raising the spectre of a double-dip recession – a threat that was not previously registering on economists' radars.

"We have had the coldest weather since records began in 1910 and this has clearly had a much bigger impact on the economy than anyone expected.

"It's notable that sectors of the economy that are less affected by the poor weather, such as manufacturing, continue to perform strongly, helping to rebalance our economy.

"There is no question of changing a fiscal plan that has established international credibility on the back of one very cold month. That would plunge Britain back into a financial crisis.

"We will not be blown off course by bad weather."

The ONS's report said that the economy shrank by 0.5 per cent in the last quarter of 2010, contrary to widespread predictions of a growth of around 0.5 per cent.

The ONS said that the economy had been impacted by the severe weather, but that without it, the economy would have nonetheless been “flattish”.

The ONS figures deal only with the output of the economy and are due for revision in a month, when they will include consumer spending – an area much more likely to have fallen prey to the arctic weather.

The ONS data followed the criticism of the government's economic policy the day before by the outgoing head of the Confederation of British Industry (CBI), Sir Richard Lambert.

In a statement, Mr Lambert said that while the government’s plan to bring the deficit under control and streamline public services was widely supported by business, it had “failed so far to articulate in big picture terms its vision of what the UK economy might become under its stewardship.

"And it’s taken a series of policy initiatives for political reasons, apparently careless of the damage that they might do to business and to job creation.

"This matters a great deal, because public spending cuts and private sector growth are two sides of the same coin.”

The figures show that there was a drop in output in transport and storage industries as well as in business and financial services. Construction output dropped by 3.3 per cent, compared with a rise of 3.9 per cent in the previous quarter.

"It seems that the economy is incredibly vulnerable. And with the fiscal tightening yet to fully bite, we have to brace ourselves for a bumpy ride."

The Shadow Chancellor, Ed Balls, said: "We are seeing the first signs of what the Conservative-led government's decisions are having on the economy.

"The fact is cuts which go too far and too fast will damage our economy. And shrinking growth and rising unemployment is not only bad news for families but will actually make it more difficult to get the deficit down,” he told the BBC.