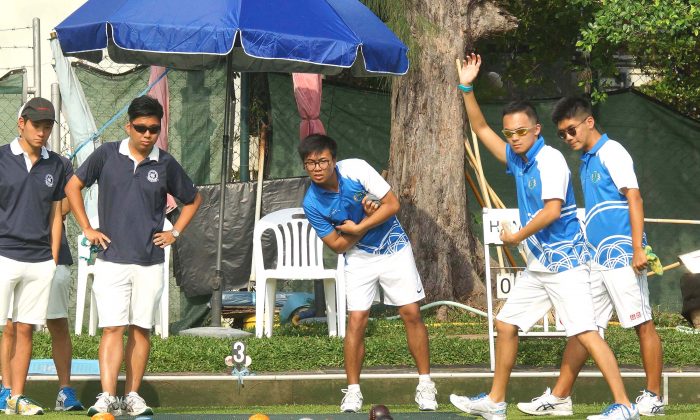 Adrian Yau (second from right) of the Youth Development Team waived to indicate a good bowl from skipper Jason Choi (not in photo) during the semi-final of the National Fours last Sunday, May 7. 2017. But the performance was not good enough to take them through to the final as they were defeated by Craigengower Cricket Club 17-14. (Mike Worth)
HK Lawn Bowls

HONG KONG—After booking their place in the forthcoming Finals Day with the National Pairs just a few weeks ago, Shirley Ko and Peggy Ma from the Indian Recreation Club (IRC) added the National Fours final to their calendar after prevailing in the semi-final last Sunday, May 7.

Well-decorated Ko was a veteran bowler who represented Canada at international level and was a runner-up in the inaugural women singles at the Hong Kong International Bowls Classic back in 2008.

Ko and Ma partnering with clubmate Lynda Lo and Teresa Tung faced a strong team of youngsters from Craigengower Club (CCC) in the semi-final.  The IRC team took four in the first end and added on in the second.  They then lost the following six ends to trail the CCC girls from then on.

The IRC team were still behind at 8-14 after 13 ends but somehow they got the touch back and won 11 shots in the next four ends.  They eventually won the match 19-15.

In the men’s section, the Youth Development Team’s hope of dominating in the final was dashed in the last minute when the defending champion skipped by Jason Choi was defeated by a strong CCC team that was skipped by the 2015 Bowler of the Year Jordi Lo.  Other members of the team included Imen Tang, Lui Chin Hong and youngster Martin Sham.

Both finals will be played on the first Finals Day of the year, which is scheduled for July 9 at the Kowloon Cricket Club.

The Premier league continues this weekend on Saturday May 13, starting at 2:30pm at all greens in Hong Kong.